Motorists stranded on I-95 after snowstorm

Throughout the day on Tuesday, stranded drivers on I-95 have slowly been able to get off the interstate and they have some harrowing stories to tell. FOX 5's Sierra Fox has more.

FREDERICKSBURG, Va. - Interstate 95 in Virginia reopened Tuesday night after hundreds of drivers were stranded, a majority of them spending the night in their vehicles when a major snowstorm struck the D.C. region Monday creating gridlock on the roadway.

The incident began with a major crash involving several tractor trailers Monday afternoon. Traffic along a 50-mile stretch of Interstate 95 came to a standstill shortly after centered around the Fredericksburg area.

VDOT says I-95 is now open and all disabled vehicles have been removed from the interstate. 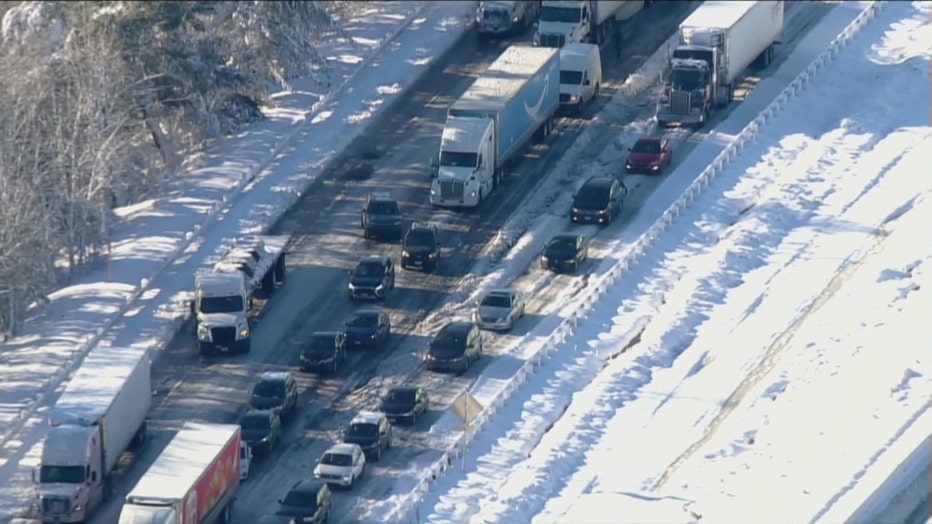 Between 7 to 11 inches of snow accumulated in the area Monday with much of it freezing as the sun went down. As of 3:30 p.m. Monday, Virginia State Police said troopers had responded to more than 2,000 calls for service due to hazardous road conditions. 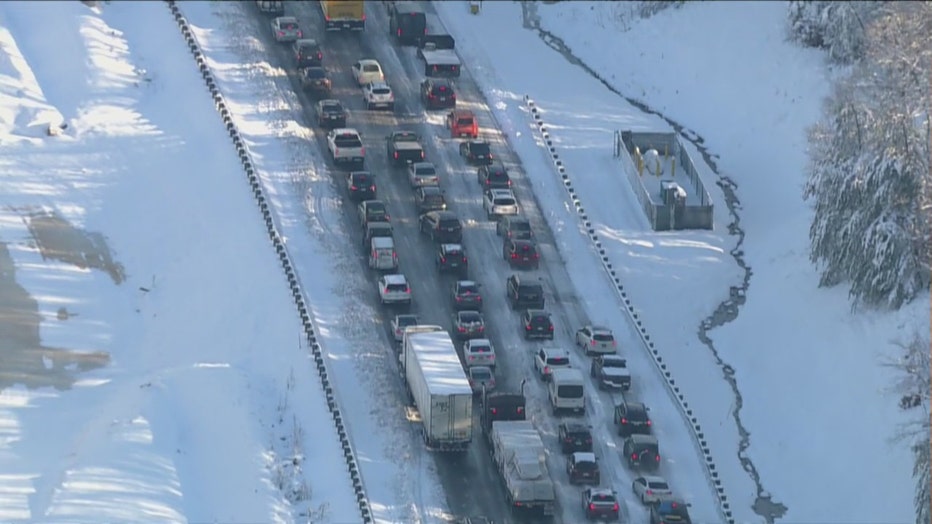 I-95 Shutdown: Couple stranded for hours on I-95 in Virginia after snowstorm sweeps across region

FOX 5’s Melanie Alnwick spoke with a man who was stuck for hours on Interstate 95 in Virginia after conditions related to Monday’s snowstorm made roads impassable.

Gov. Ralph Northam spoke with FOX 5 about the situation and said his team responded through the night alongside state police, transportation and emergency management officials. "An emergency message is going to all stranded drivers connecting them to support, and the state is working with localities to open warming shelters as needed. While sunlight is expected to help @VaDOT clear the road, all Virginians should continue to avoid 1-95," he tweeted Tuesday morning.

FOX 5 photojournalist Mike Rickard spoke with a man who has been stranded on Interstate-95 in the Triangle, Virginia area for nearly 24 hours after a severe snowstorm moved across the region Monday morning.

Driver stranded on I-95 in Virginia speaks with FOX 5

FOX 5 spoke with Marcel, a driver who has been stuck on Interstate 95 in Virginia overnight after the region’s first major snowstorm in years hit the area. 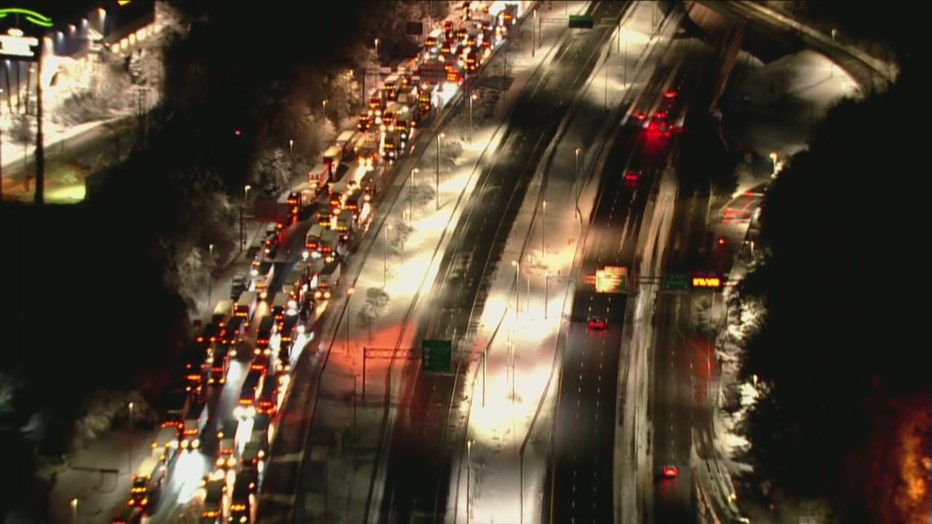 "We know many travelers have been stuck on Interstate 95 in our region for extraordinary periods of time over the past 24 hours, in some cases since Monday morning," said Marcie Parker, VDOT Fredericksburg District Engineer, in a statement released Tuesday morning. "This is unprecedented, and we continue to steadily move stopped trucks to make progress toward restoring lanes. In addition to clearing the trucks, we are treating for snow and several inches of ice that has accumulated around them to ensure that when the lanes reopen, motorists can safely proceed to their destination," 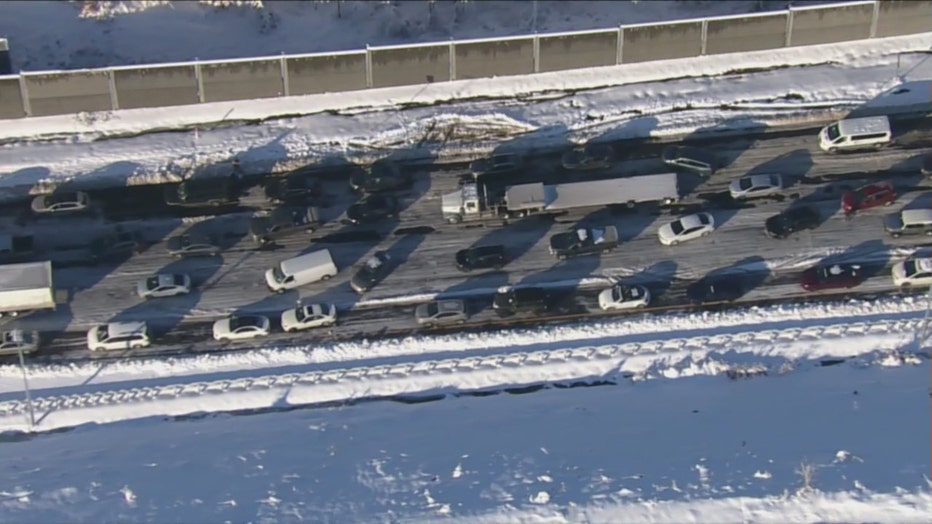 Traffic Alert: Drivers Stranded On I-95 In Virginia

Authorities say some drivers have been stuck on Interstate 95 in the Fredericksburg area of Virginia since Monday morning following a period of heavy snow that swept across the region. 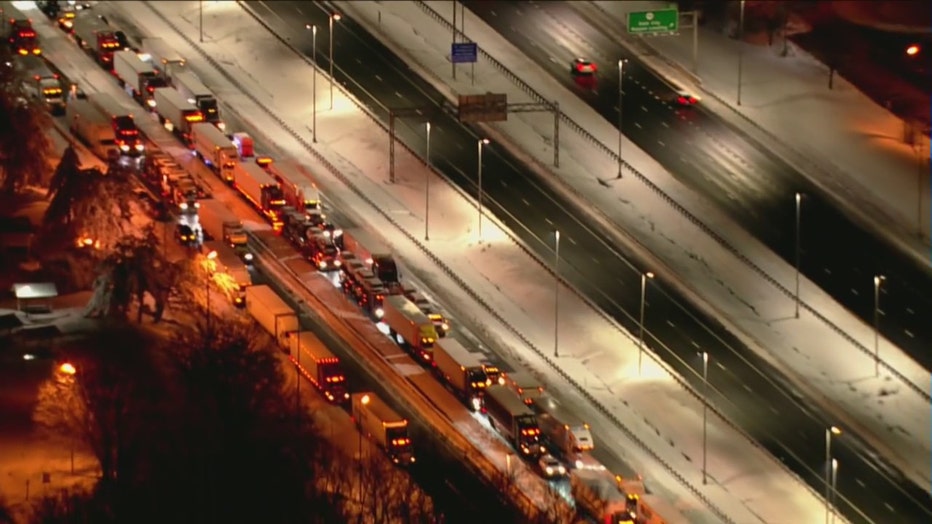 As frustrations mounted Tuesday, some drivers were spotted turning around on parts of Interstate 95 in Virginia and driving the wrong way in an attempt to escape traffic.

Virginia Senator Tim Kaine said he has been struck in traffic on Interstate 95 along with other drivers for 19 hours overnight.

"I started my normal 2 hour drive to DC at 1pm yesterday. 19 hours later, I’m still not near the Capitol. My office is in touch with VDOT to see how we can help other Virginians in this situation. Please stay safe everyone," he tweeted Tuesday morning.

The Senate says they postponed their noon vote Tuesday because of the highway shutdown and possibly Kaine's absence.

By 1 p.m. Tuesday VDOT said they were detouring motorists who were on I-95 between Caroline County and Prince William County.

FOX 5 spoke with many motorists who shared their frustration and described feeling as they remained stranded on the stretch of interstate.

I-95 Shutdown: Stranded motorist shows FOX 5 inside the I-95 backup in Virginia

Justin Wilson, a motorist stranded in Virginia on I-95, showed FOX 5 his situation from the highway where traffic remains at a standstill.

Stranded drivers walk dogs along I-95, melt snow for water

Drivers were seen in the morning hours Tuesday getting out of their cars, some walking dogs along the interstate and even melting snow to provide water to their pets.

I-95 Shutdown: Drivers struck for hours on I-95 in Virginia

FOX 5 spoke with drivers who described their situations as I-95 in Virginia remained shut down.