The investigation found that 95 percent were contaminated with one or more of four toxic heavy metals, including arsenic, lead, cadmium and mercury.

The lawsuit was filed against Nurture Inc., the parent company of Happy Family Organics — which makes the two Happy Tot products named in the suit.

The lawsuit, filed on behalf of Ecological Alliance LLC in Los Angeles, alleges that the Happy Tot cheese and spinach ravioli product contains more than 12 times the maximum amount of lead a child can be exposed to in a day. It also names the Happy Tot apple and spinach fruit snack bar as having higher-than-acceptable amounts of lead in a single serving.

Whole Foods and Target, which sell Happy Tot products, are also named in the lawsuit. 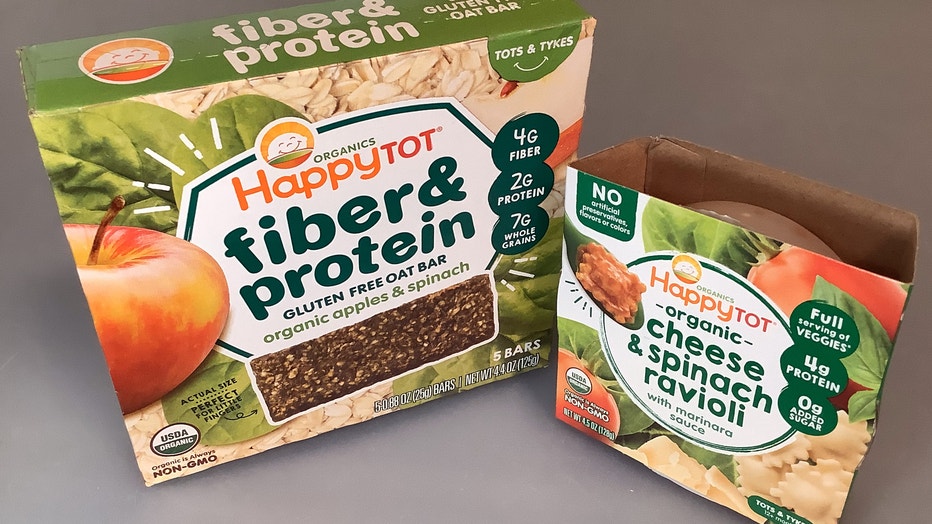 FILE - The two Happy Tot products named in the lawsuit are pictured in a provided image.

The excessive lead levels were allegedly detected in "independent laboratory tests conducted recently on an array of food products," according to a news release announcing the lawsuit.

Happy Family Organics did not immediately return a request for comment. FOX Television Stations has also requested comments from Target and Whole Foods.

"We can say with the utmost confidence that all Happy Family Organics products are safe for babies and toddlers to enjoy and we are proud to have best-in-class testing protocols in our industry," the company said in a statement at the time. "We only sell products that have been rigorously tested and we do not have products in-market with contaminant ranges outside of the limits set by the FDA."

A similar investigation in 2019 found that 95% of baby foods tested contained one or more toxic chemicals. The report, commissioned by Healthy Babies Bright Futures, stated that tests were conducted on 168 baby foods from major food brands in the U.S. The investigation found that most were contaminated with one or more arsenic, lead, cadmium and mercury.

Lead poisoning can hurt a child’s brain and nervous system and slow down growth and development. No safe amount of lead has been found in a child’s blood, according to the U.S. Centers for Disease Control and Prevention.