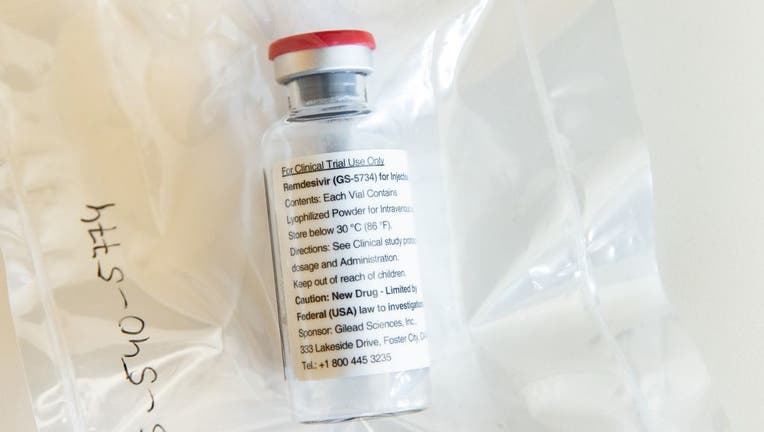 One vial of the drug Remdesivir lies during a press conference about the start of a study with the Ebola drug Remdesivir in particularly severely ill patients at the University Hospital Eppendorf (UKE) in Hamburg, northern Germany on April 8, 2020, a

MINNEAPOLIS (FOX 9) - A drug that is showing some early success in treating severe cases of COVID-19 is now being studied in trials by Hennepin Healthcare.

The Hennepin Healthcare Research Institute has launched two trials to study the safety of remdesivir.

The drug had previously been tested on humans for an Ebola treatment. It has also shown some success with in vitro and animal models against other coronaviruses strains including MERS and SARS.

Seventy patients at Hennepin Healthcare will join 1,000 others around the world participating in the trial research.

The announcement comes as the New England Journal of Medicine published research showing some success using the drug on severe cases of COVID-19.

Twenty-five patients were discharged within 18 days while seven patients died.

Researchers say further research, like the Hennepin Healthcare trials, is needed to determine exactly how effective the treatment is against coronavirus. It's also not clear if the drug could be used earlier on in treatment to prevent hospitalizations.

Remdesivir joins other treatment drugs like chloroquine and hydroxychloroquine, which have been touted by President Trump as a possible breakthrough, as potential treatments that could help the United States return to normal.

At the same time, the United States is rushing to find a vaccine. But while the Trump administration has sped up the development of a COVID-19 vaccine, it will still likely be a year before it is available.