A player on the Gustavus Adolphus College women’s hockey team is thankful to be back on her feet, a few weeks after breaking two vertebrae in her spine after taking an illegal hit from behind that threw her headfirst into the boards.

MINNEAPOLIS (FOX 9) - A player on the Gustavus Adolphus College women’s hockey team is thankful to be back on her feet, a few weeks after an illegal hit from behind threw her headfirst into the boards.

"Multiple doctors told me there was an angel on my shoulder when the incident occurred," Heather Olinger told FOX 9 on Tuesday. On Friday the 13th, while playing against the college of St. Benedict’s, Olinger’s future flashed in front of her eyes.

"I immediately started kicking my legs and moving my arms," Heather said. "All I could really think about was I had to remember what it felt like to move my arms and feet because I might never be able to again."

At Hennepin Healthcare, doctors informed her she had two broken vertebrae in her spine: a C7 fracture and a T4 burst fracture. 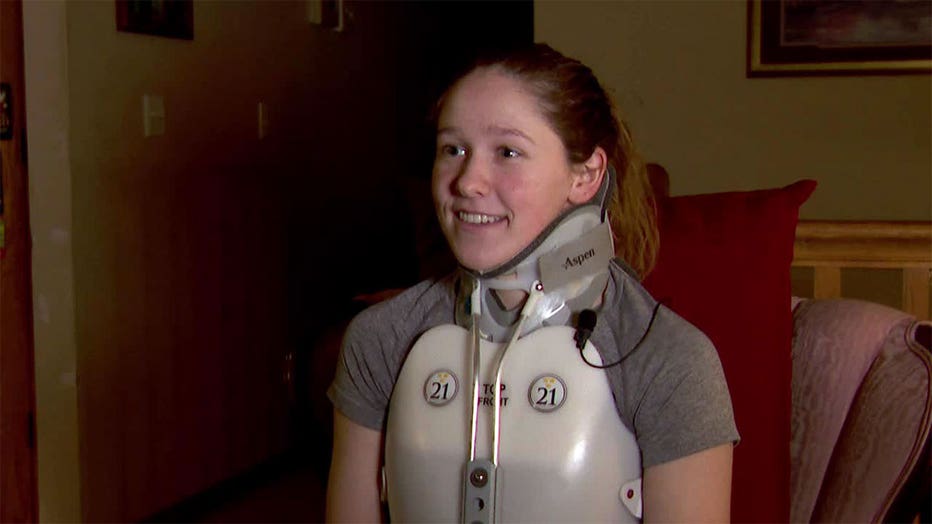 Heather Olinger is back on her feet after suffering a spinal injury while playing hockey for Gustavus. (FOX 9)

"I can’t even describe the pain I was in… the worst pain I’ve ever felt in my life," Heather continued. "I hope no one ever has to go through that pain ever again."

After a successful spinal fusion surgery on Jan. 16th, Heather and her family are counting their blessings in what they say is the best outcome anyone could’ve imagined.

She’ll be in a full neck and torso brace for the next three months, followed by physical therapy. But she can make a full recovery.

Meanwhile, guiding her through this lowest of lows, a group calling itself Heather’s Angels was always by her side. As she sat in the hospital, Heather felt the effects of hundreds of prayers, messages, and support. The local hockey community came around the Olinger’s during this tough time, with more than $25,000.

"When I found out they had done that I just started crying," Heather finished. "I just feel so grateful and so immensely blessed."