Gov. Tim Walz spoke Monday in front of city hall in Duluth, Minnesota to mark 100 years since three black men were lynched by a white mob in the city.

On June 15, 1920, six black circus workers were arrested for the alleged rape of a white woman in Duluth. That night, a massive mob broke into the jail and killed three of the men—Elmer Jackson, Issac McGhie and Elias Clayton—in the street. No one was ever convicted for those killings.

'IT MAKES ME ANGRY': Longtime Duluth resident recalls the pain that lingered decades after 1920 lynching

Longtime Duluth resident recalls the pain that lingered after 1920 lynchings

As state leaders issued a pardon for the man convicted in a 1920 rape case that sparked the lynching of three black men, a longtime resident recalled the pain that followed the act of violence.

Last week, the Minnesota Board of Pardons granted the state’s first posthumous pardon to Max Mason, one of the six men arrested after the alleged rape. He was tried and convicted for the alleged rape and sentenced to 30 years in jail, despite little evidence linking him to the crime.

He was granted parole in 1925 and moved to Alabama, where he later died at the age of 46. Attorney General Keith Ellison, who sits on the three-person pardon board, said Mason was falsely accused and wrongly convicted.

On Monday afternoon, the Duluth community will remember Mason as well as the three lynching victims: Jackson, McGhie and Clayton. 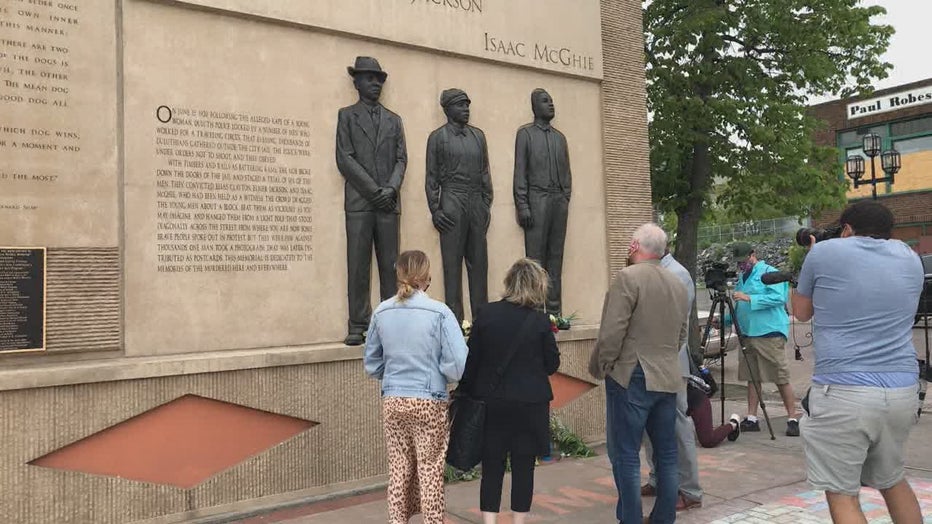 Gov. Walz and his family toured the memorial to the victims of the Duluth lynchings to mark the 100-year anniversary of the event. (FOX 9)

Gov. Tim Walz toured the memorial in honor of those killed and convicted. He also held a meeting with community members. Afterwards, he delivered remarks outside city hall alongside Duluth Mayor Emily Larson.

in his remarks, the governor said there was a "direct line" between the lynchings and George Floyd's death in Minneapolis three weeks ago.

“This is a story of who we are,” Walz said. “Without this story, without the connection to mr. clayton, Mr. Jackson, Mr. McGhie and Max Mason its easy then not to see that there’s a direct line that descends down for 100 years to George Floyd laying on the streets at 38th and Chicago.”