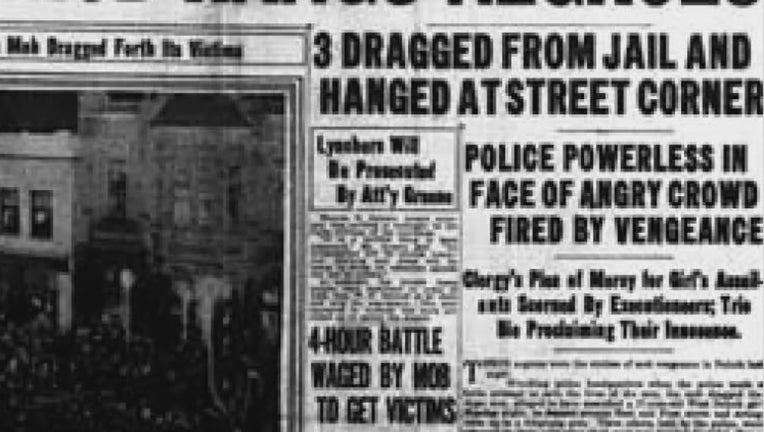 DULUTH, Minn. (FOX 9) - Louise McKnight and her family moved from Mississippi to Duluth, Minnesota in the early ‘40s when she was just 10 years old. It wasn't until years later she learned of her new hometown's secret shame.

"It kept filtering out a little bit, a little bit to us,” she said. “People talk. Pictures and everything. We started to get interested in what was happening and what had happened."

Longtime Duluth resident recalls the pain that lingered after 1920 lynchings

As state leaders issued a pardon for the man convicted in a 1920 rape case that sparked the lynching of three black men, a longtime resident recalled the pain that followed the act of violence.

McKnight says growing up, her parents and other African Americans in Duluth kept to themselves. They didn't talk about the mob that took three black men, who had been accused of raping a white woman, from jail and hung them from a light pole on June 15, 1920.

The 88-year-old remembers being horrified by postcards with images of the lynching on them. It showed the men surrounded by a crowd of white people apparently pleased by what they had done.

"The pictures were brought out and you could see they were happy about it,” said McKnight. “We couldn't believe one human being could do that to another and smile and laugh. It was something. It was something."

McKnight says the fact that it took 100 years to pardon Max Mason, the man wrongly convicted of raping Irene Tusken, is a hollow victory because he died in 1942 and isn't around to see his name cleared.

"The more I hear and find out, it makes me angry,” she said. “If they had started to do something a long time ago maybe it wouldn't have reached what it is today."

While it’s a coincidence, Mason's pardon comes two and a half weeks after the death of George Floyd. Demonstrators around the world are calling for an end to racial injustice. McKnight says that won't happen until we learn from the wrongs of the past to prevent them from happening in the future.