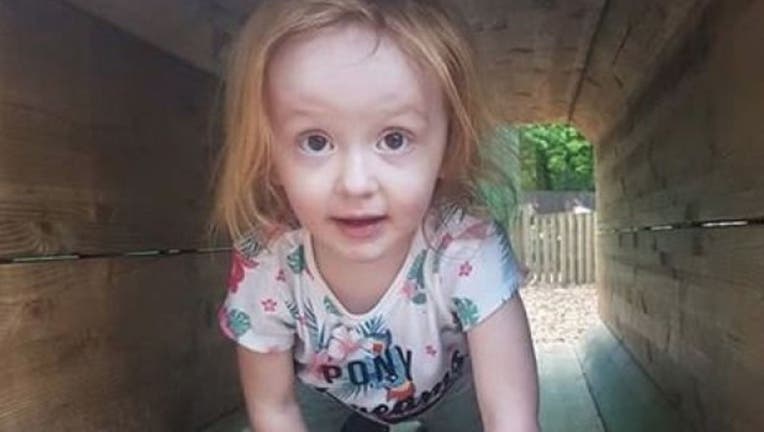 RAYLEIGH, England - (FOX NEWS) -- A United Kingdom mother who claims doctors wrote off her 3-year-old daughter’s stomach pains as constipation says the young girl died just days after she was diagnosed with a rare form of cancer.

In June, Aoife Flanagan, of Rayleigh, began to complain of stomach pains as well as pain in other areas of her body, her mother, Eilish Flanagan, told Essex Live. Concerned, Flanagan took her daughter to the doctor multiple times — but claims she was told each time Aoife’s condition was caused by constipation.

"I took her to see the GP or a consultant doctor 11 times in three weeks. She'd been in and out of the hospital with different infections and problems but they kept telling us she had common child constipation,” she said.

"As a mother, I knew there was something else wrong. I raised my concerns and she had pains in other areas of her body but the doctors never examined her,” she told the outlet, claiming Aoife had a visible tumor on her bottom that doctors “failed to investigate.”

Flanagan alleges doctors also questioned if she was properly feeding her daughter and if she got enough exercise. The young girl loved horseback riding, and rode every day, sometimes twice a day, she claims.

While waiting to be transferred to a different hospital, an X-ray revealed Aoife had a large tumor in her liver that was blocking her bowel, her mother told Essex Live.

Doctors at the hospital Aoife was transferred to diagnosed the young girl with germ cell cancer, which typically forms in a person’s reproductive cells. However, germ cell tumors can also form in the abdomen, brain and chest — though this is rare, per the Mayo Clinic.

This type of cancer is highly treatable, even in the later stages. But it was too late for Aoife, her mother said.

On July 7, just days after her diagnosis, the 3-year-old died in her mother’s arms. Aoife suffered from a “huge” heart attack, her mother said.

"I held her because I knew something was wrong with her. She died in my arms,” she told Essex Live.

“It was just too late. They didn't give us a fair chance,” she said. "She was scared because she had lost quite a lot of weight but she still had the courage in her and she was fighting with every ounce of her body, she was so brave."

Some of Aiofe’s organs, tumors and tissues were donated for research purposes, her mother said.

"She was very much a wild child,” Flanagan said of her daughter, who enjoyed her pony, Bubbles, and “absolutely adored Queen Elsa from 'Frozen.'”

"She was so happy, bubbly and bouncy. And the best word to describe her is kind,” she added.

Flanagan is now in the process of finalizing a charity called “Aoife’s Bubbles.”

“We are awaiting our charity registration, but we will be the U.K.'s only registered childhood Germ Cell cancer charity. We want to raise as much awareness and educate as many people as possible about the symptoms, diagnosis, and effect of this rare disease,” the mother says on the charity’s website.