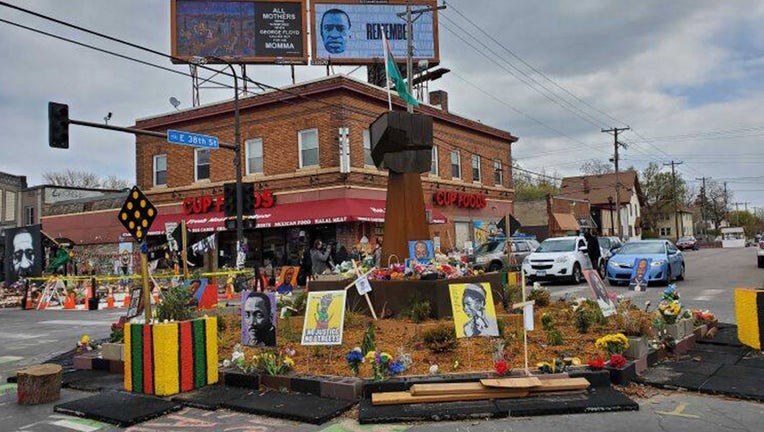 George Floyd Square at 38th and Chicago in Minneapolis.  (FOX 9)

MINNEAPOLIS (FOX 9) - Tuesday, May 25 will mark the one-year anniversary of George Floyd’s death.

Floyd died on May 25, 2020 while being detained by Minneapolis police officers. Now-fired officer Derek Chauvin was convicted of his murder earlier this spring. The three other former officers charged in Floyd’s death will stand trial together next year. All four ex-officers are also facing federal charges for allegedly violating Floyd’s civil rights during the deadly arrest.

In the year since Floyd’s death, the intersection where he was killed—38th and Chicago—has become an international memorial to Floyd and a gathering place for the community. The intersection, now known as George Floyd Square, remains closed to traffic.

A number of events will take place at George Floyd Square and throughout Minneapolis in the days leading up to Tuesday, May 25 to honor and remember Floyd. Gov. Tim Walz is also calling for a moment of silence at 1 p.m. Tuesday—the length of time Chauvin kneeled on Floyd's neck and back.

Rev. Al Sharpton, the family of George Floyd and their attorney Benjamin Crump will lead several marches across the U.S. this weekend, including one in Minneapolis on Sunday.

A rally will be held outside the Hennepin County Courthouse at 4 p.m., followed by a march beginning at 5:30 p.m.

The George Floyd Memorial Foundation is hosting a series of positive community events to commemorate Floyd’s death, including a virtual day of action on Monday "designed to mobilize people to get and stay involved in the fight for justice."

The day of action will encourage people to use social media, contact local officials and engage in their communities.

Celebration of life and remembrance at The Commons

The George Floyd Memorial Foundation is hosting day-long celebration at The Commons in Minneapolis featuring special guests and musical performances as well as locally-owned business by hosting a food truck alley and vendor expo. The event will take place from 10 a.m. - 5 p.m. The goal, organizers say, is to "celebrate life through Black culture, art and history."

The day-long event will begin at 1 p.m. local and include community art and children’s activities, along with an open mic session and concerts featuring Grammy Award-winning Sounds of Blackness and notable local DJ Sophia Eris at 6 p.m., ending with a candlelit vigil honoring Floyd at 8 p.m.