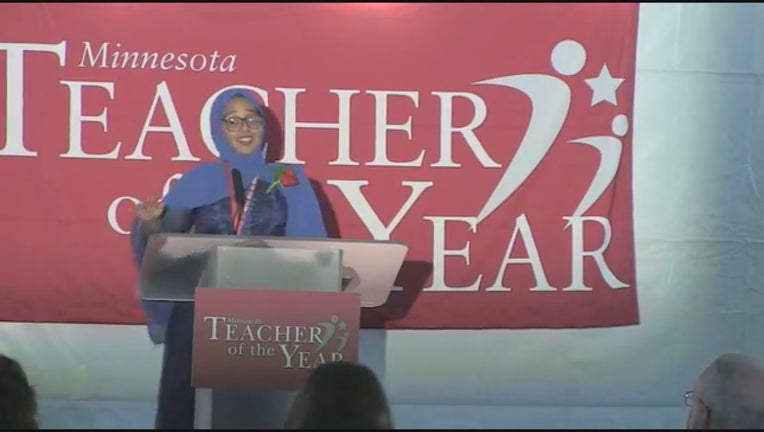 BURNSVILLE, Minn. (FOX 9) - A fourth grade teacher from an elementary school in Burnsville is the 2020 Minnesota Teacher of the Year.

Qorsho Hassan of Echo Park Elementary School in the Rosemount-Apple Valley-Eagan district won the honor during a ceremony Thursday night.

"I'm blessed, but I'm surprised because during my Zoom interview my internet cut out and it just gave me flashbacks to all the Zoom conferences I had with my students and the awkwardness of that," said Hassan with a laugh during her acceptance speech.

Hassan, who is Black and Muslim, described difficulties she faced growing up, such as racism and Islamophobia, in a post-9/11 climate. She says some teachers didn't try to pronounce her name correctly and she felt her voice as a student was silenced.

"Teaching has taught me that compliance will never be as effective as relationships," said Hassan. "I'm radically student-centered because I'm constantly trying to be who I needed when I was younger. I refuse for anyone to dim the light of my students to refuse to see their culture, their skin, their color, their language, their sexual orientation, gender or faith or any other characteristic as a deficit."

This marked her first year teaching in the Rosemount-Apple Valley-Eagan district, but before then she taught for three years in the Burnsville district, three years in Ohio and also one year in Malaysia as part of a Fulbright Fellowship. Hassan is the 56th recipient of the Minnesota Teacher of the Year award.