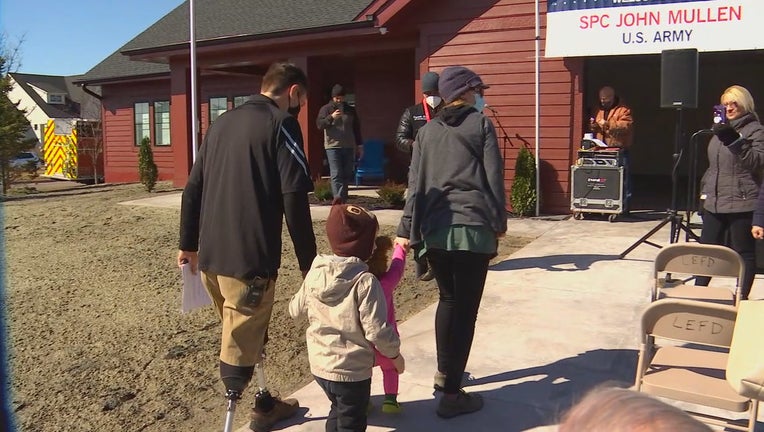 Former Army Specialist John Mullen and his family walk up to their new home in Lake Elmo, Minnesota. (FOX 9)

LAKE ELMO, Minn. (FOX 9) - A veteran, who was injured fighting in Afghanistan, and his family got the chance to move into a new smart home on Thursday, thanks to a donation from a charity group that helps those who've served our country.

It's a home built with the labor and love of dozens and businesses and donors. For former Army Specialist John Mullen and his family, the path from Afghanistan to real life is a journey that walks on legs forged from steel.

A veteran,&nbsp;who was injured fighting in Afghanistan, and his family got the chance to move into a new smart home on Thursday, thanks to a donation from a charity group that helps those who've served our country.

"I think I don’t really fully comprehend yet how of a difference it’s going to make, and I think I’ll realize that over time," said John.

An IED in an Afghan village robbed John of his legs, but not his drive. It’s why the Tunnel to Tower’s Foundation built this new home in Lake Elmo specifically to meet his physical needs, with every room being wheelchair accessible. He can cook at the stove sitting down and there are new smart technologies throughout the house.

"But the fact that they’ve taken it to the next level and wanting to make sure that it’s not just about accessibility, it’s about having features that also will allow for easier living," said John.

John first heard about Tunnel to Towers when he was in recovery at Walter Reed. He eventually applied to the program and he’s not the only one moving into a new home this year. Across the country, this foundation is helping police officers, firefighters and veterans move into 120 new homes.

In honor of the sacrifices made since September 11th in 2001, the foundation presented Mullen with a piece of steel from the World Trade Center towers.

"It’s just amazing to see the amount of effort it takes to put something like this together," added John.

The timing for the Mullen family could not have been better. They are expecting their third child this summer.