MINNEAPOLIS (FOX 9) - A competitive gymnast since he was 6 years old, Evan Ng was thrilled to earn a scholarship and join the University of Minnesota men’s team. However before he ever stepped foot on campus last year as a freshman, his sport was among those eliminated during the pandemic.

"When The U announced the men’s gymnastics team was eliminated my dreams were pretty much crushed," said Ng.

Former U of M gymnast sues school for eliminating sport

The suit claims the decision to drop three men’s sports, including gymnastics, is sex discrimination in violation of the equal protection clause of the Fourteenth Amendment and a violation of Title IX.

Friday, attorneys representing Ng announced a lawsuit naming the U of M Board of Regents, athletic director Mark Coyle, and president Joan Gabel. The suit claims the decision to drop three men’s sports, including gymnastics, is sex discrimination in violation of the equal protection clause of the Fourteenth Amendment and a violation of Title IX.

"This decision basically treats athletes as nothing more than numbers on a ledger," said Ng’s attorney Caleb Trotter. "It ignores the preferences the student body and says to athletes like Evan, ‘I’m sorry we have enough of you.’"

Ng's legal team points out there are only 13 other division one gymnastic programs across the country, and any potential transfer opportunity became even less likely when a shoulder injury and surgery shortened his first college season to just two pommel horse competitions. Now with three years of eligibility left Ng and supporters rallying around him hope a victory in court would reinstate the U’s men’s gymnastics program.

"This isn’t just about me but the gymnasts I’ve competed with," Ng said. "This program is bigger than us. This is also about the students that will come to compete here in the future." 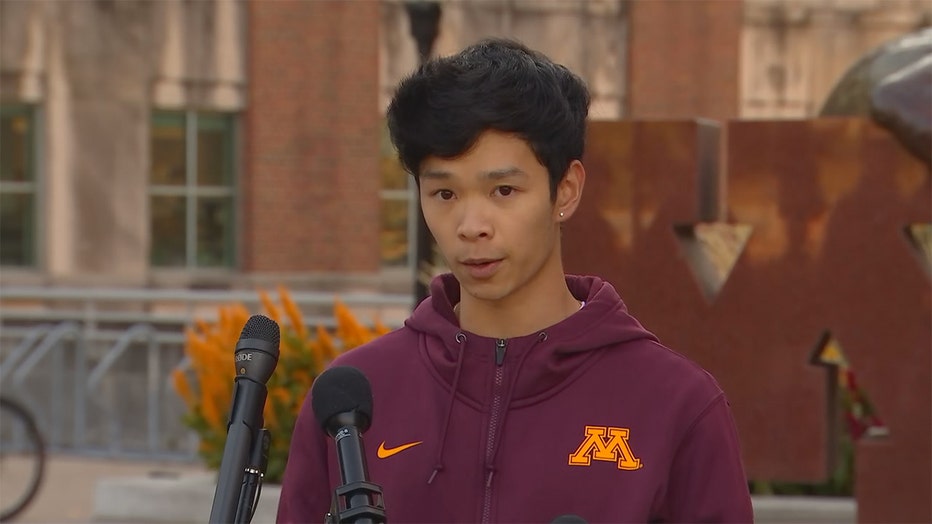 Evan Ng is suing the University of Minnesota over the school eliminating the men's gymnastics program.  (FOX 9)

FOX 9 reached out to the U of M and received the following statement from a spokesperson.

"The decision to eliminate three intercollegiate sports programs was a difficult one. Importantly, this lawsuit isn’t just about the university. It is a broad challenge to how title ix has been implemented by the U.S. government across colleges and universities nationwide to achieve equal opportunity.  The university has and will always honor its legal obligations."