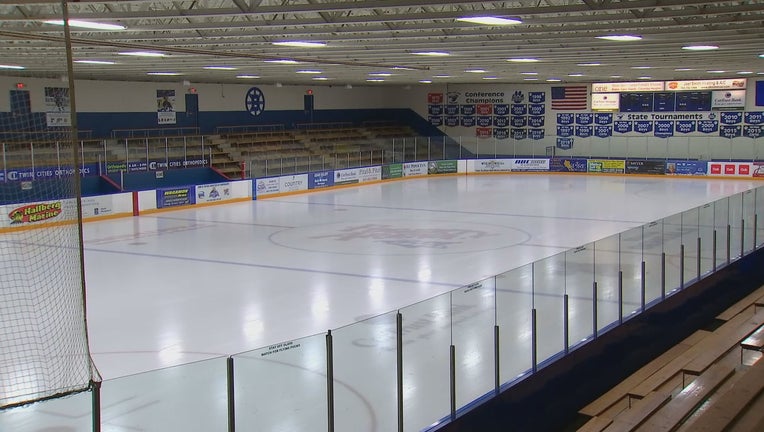 The ice is empty at Fogerty Ice Arena in Blaine, Minnesota amid the governor's order. (FOX 9)

"There’s typically so much energy in the rink," said John Benton, former Olympic Curler. Benton is now the director of curling operations at Fogerty.

High school teams and youth sports leagues are not playing right now following an executive order from Gov. Tim Walz and that has put a financial strain on Fogerty Ice Arena.

"It’s an eerie feeling to be here right now because this is usually the middle of our busiest time," Benton said as he looked inside the empty arena. "There would be kids running around, hockey sticks, hockey bags, and curlers on the other side."

The arena shut down after Governor Tim Walz signed an executive order temporarily putting a stop to youth sports to help stop the spread of the coronavirus, but the bills are piling up and Benton is not sure how much longer the nearly 40-year-old arena can stay open without the youth league.

According to the Minnesota Ice Arena Manager’s Association (MIAMA), there are nearly 180 ice arenas statewide. More than half are backed by cities, giving them more financial support, but Fogerty is a nonprofit and runs through private funding.

"We’re a little bit in a tough spot right now," MIAMA President, Mat Hennen said. "We’re just waiting around to get the OK to open back up a lot of the private rinks and youth rinks that are a bit backed up due to the new guidance."

In the meantime, staff launched a fundraiser and is relying on its community for support.

"I’m pretty hopeful," said Benton. "Seeing those testimonials from all the great alumni, you recognize that Fogerty has a huge impact in the community."

Benton said there’s enough money to keep the arena open through the end of the winter season, but donations are needed to help keep the facility open past that.