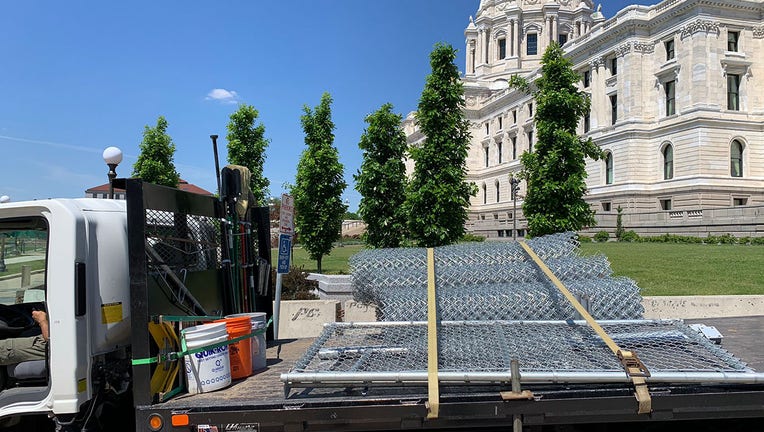 The fencing being removed from around the Minnesota State Capitol.  (FOX 9)

ST. PAUL, Minn. (FOX 9) - Crews are expected to begin removing the barriers that surround the Minnesota State Capitol in St. Paul Tuesday, which have been in place for over a year.

The first temporary barrier was installed on May 31, 2020 during the unrest following the death of George Floyd. It was replaced this spring by a more secure fence ahead of the murder trial of Derek Chauvin, the former Minneapolis police officer convicted in Floyd’s death.

Barriers around Minnesota State Capitol coming down after year

The barriers surrounding Minnesota State Capitol, which have been in place for over a year now, are starting to come down Tuesday. The barriers were first installed during the unrest following the death of George Floyd last spring.

As the barriers come down, state officials are also working to reopen the Capitol to the public with a special session expected in a few weeks.

House Speaker Melissa Hortman said she expects the Capitol will be reopened to the public before June 14, the likely date for the special session.

Hortman said all members can be on the House floor and she will allow the public in the House galleries.

"It means the era of pandemic legislating is over," she said of the Capitol fence removal this week.