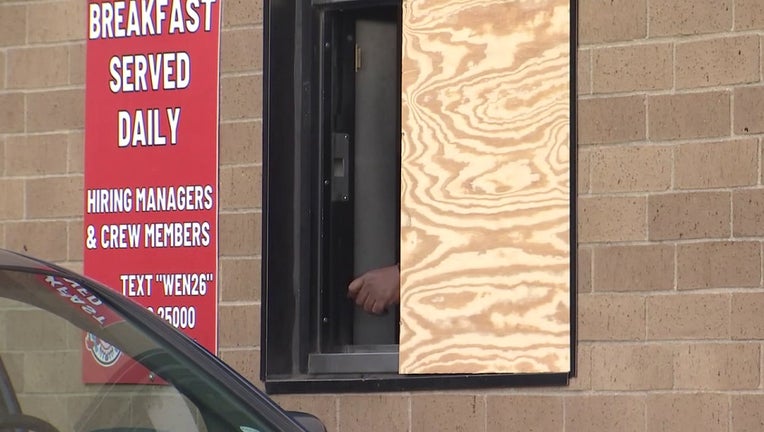 The broken window at Wendy's in Minnetonka (FOX 9)

(FOX 9) - Two suspects have been charged in a series of smash-and-grab break-ins at fast food restaurants throughout the western suburbs after multiple police departments coordinated to connect the crimes to a traffic stop.

Jamaill Gibbs, 30, and Trevion Green, 27, both of Houston, Texas, have been charged with two counts of third-degree stealing/commit felony and two counts of second-degree building tool possession each for their involvement in what police believe were back-to-back burglaries at multiple Taco Bell and Wendy’s locations.

According to Minnetonka police, on Tuesday officers were dispatched to a Wendy’s located at 12950 Wayzata Boulevard for a reported burglary through the drive-thru window.

When officers arrived they found the drive-thru window had been shattered, and the office rummaged through. The safe had been cut into with some sort of tool and money stolen. At the time there were no suspects.

A short time later officers were dispatched to a Taco Bell a half-mile away at 12320 Wayzata Boulevard for the same report – a shattered drive-thru window, an office rummaged through and money taken.

"That was an anomaly. We don’t normally see a string of the same type of location being hit all in one night," Sergeant Jason Tait with the Minnetonka Police Department told FOX 9.

Two suspects have been charged in a series of smash-and-grab break-ins at fast food restaurants throughout the western suburbs after multiple police departments coordinated to connect the crimes to a traffic stop.

The Taco Bell was able to provide video surveillance of the incident, which showed two men entering through the shattered window wearing gloves and masks, and using a bright green grinder tool to gain access to the money inside the safe. However, no known suspects remained.

After the burglary reports, the Golden Valley Police department notified Minnetonka officers about a traffic stop that they had made at 2:36 a.m. regarding a white Jeep Grand Cherokee with Texas license plates driving without headlights.

Golden Valley officers noted a green leafy substance believed to be marijuana in plain view, and upon searching the vehicle located a large amount of loose bills in the center console, gloves and a backpack containing two bright green Ryobi grinders and accessories.

Nevertheless, they were free to leave.

Minnetonka Police began monitoring dispatched calls when they noticed the same operation – break-ins through the drive-thru windows of both a Wendy’s and Taco Bell – except this time in Plymouth.

After receiving bodycam footage from Golden Valley police, officers were able to identify the suspects as the defendants, who were then also connected to the suspects in surveillance footage of the break-ins.

Through law enforcement databases the white Jeep Grand Cherokee – a rental from Pearland, Texas – was located in the parking ramp of Mall of America where the suspects were later apprehended when they returned to it.

Minnetonka detectives obtained a search warrant for Gibbs’ phone and were able to determine a room at the Grandstay Hotel in Delano was rented under his name.

Inside the hotel room detectives located a backpack containing two Ryobi grinding tools, grinding wheels, shoes and gloves that matched the ones the suspects wore during the burglaries.

"This seemed to be a pattern for these suspects," Tait said, noting break-ins at the same chains in Fargo and West Fargo are being investigated into being connected to them as well. "This is a great example of how resources pooling together can do great things. This is one of those times where we got lucky, and we were able to clear a large amount of burglaries in a short amount of time."