A new study found that plastic tea bags deposit billions of micro- and nanoplastics in a single cup of tea.

MONTREAL - For thousands of years, tea has been imbibed to treat ailments, lift moods and calm the mind, but a new study found that modern packaging — specifically plastic tea bags — are releasing billions of microplastics and nanoplastics into each (otherwise) healing cup.

Researchers found that a single plastic tea bag steeped at 95 degrees Celsius, or 203 degrees Fahrenheit, releases approximately 11.6 billion microplastics and 3.1 billion nanoplastics during a typical steeping process. Their research was published in the journal Environmental Science and Technology Wednesday.

Existing studies on microplastics and nanoplastics focus on their prevalence in the environment as well as in our food and water sources. But researchers at McGill University in Montreal, Canada, led by professor of chemical engineering Nathalie Tufenkji, wondered whether recently-introduced plastic teabags could be releasing micro- and nanoplastics into beverages during brewing.

Tufenkji got the idea one day after being surprised to see what looked like a plastic tea bag in her cup from a coffee shop, Canadian Broadcasting Corporation (CBC) reported. Many tea brands now use tea bags marketed as “silken,” which are actually made of synthetic materials, such as nylon and polyethylene, so Tufenkji decided to experiment back at the lab.

“Although mindful consumers are promoting the reduction of single-use plastics, some manufacturers are creating new plastic packaging to replace traditional paper uses, such as plastic teabags,” the study abstract says.

The research team conducted an analysis on four commercial teas packaged in plastic tea bags. They cut open the bags and removed the tea leaves, then steeped the empty tea bags in hot water. 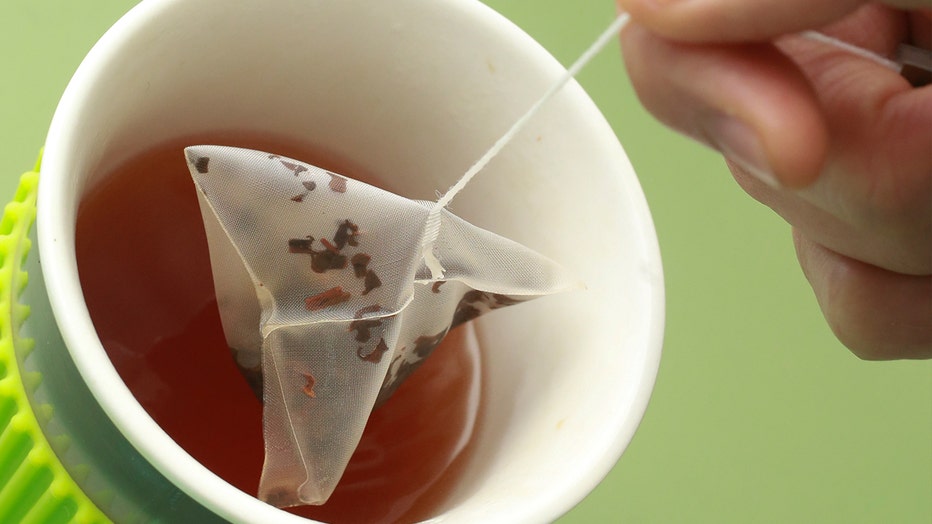 Plastic tea bags were found to release billions o micro- and nano-plastics into a single cup of tea, a new study from McGill University found. (May Tse/South China Morning Post via Getty Images)

The tea bags released significantly higher levels of nylon and polyethyene terephthalate — several orders of magnitude higher — than has been previously reported in other foods.

Not enough research has currently been done on the effects of consuming microplastics to determine what, if any, negative health effects might result.

To get a better idea, the research team at McGill did a test to see how the released particles affected small organisms called Daphnia magna, otherwise known as water fleas, which are model organisms for environmental studies.

The researchers dosed the water fleas with different amounts of the released micro- and nano-plastics from the tea bags and observed anatomical and behavioral abnormalities, though more research is needed to determine what kind of effect micro- and nanoplastics would have on humans.