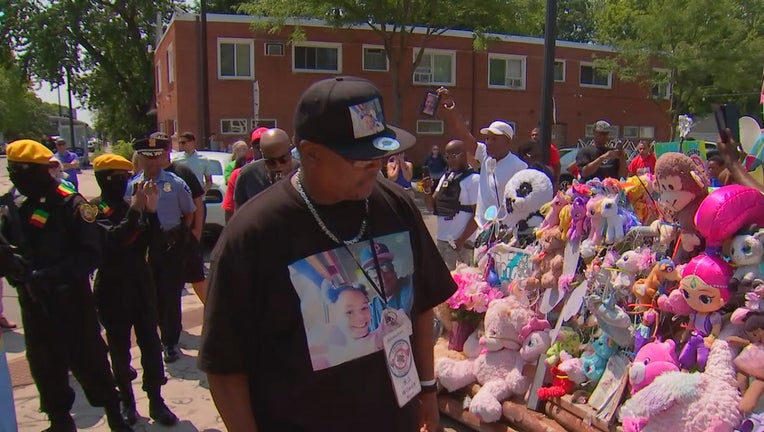 KG Wilson, the grandfather of Aniya Allen, stands at a memorial for her at 36th and Penn. (FOX 9)

MINNEAPOLIS (FOX 9) - As the recovery continues for one of the children, Sunday a march was held calling for justice for three children shot this year in Minneapolis.

This weekend, family members of Ladavionne Garrett Junior said the boy lifted his head for the first time on his own since his shooting in April -- something the family sees as a positive sign for his recovery.

Families call for justice in shootings of children in Minneapolis

As the recovery continues for one of the children injured, Sunday a march was held calling for justice for three children shot this year in Minneapolis.

Ladavionne was one of at least six children struck by bullets in Minneapolis, in a year when gun violence has increased significantly.

During a rally on Sunday, the victims' families called for justice in the shootings. These families are exhausted and they’re begging anyone with any information to just do the right thing and come forward.

"We are going to continue to uplift their names, we are not done," said Minneapolis Police Chief Medaria Arradondo.

"When you do something to a child, it hurts the whole community also, am I right?" said KG Wilson, the grandfather of Aniya and a local community activist.

Now, nearly three months later, their families came together, holding space at the spot where Aniya’s life was stolen. The families have yet to find justice or closure for any of the senseless shootings.

"This is what they took from us, this is who they murdered, a six-year-old beautiful little girl," said Wilson.

"You wake up every day and it’s unbelievable, it’s not fair," she said.

After more than 80 days, she's done taking it day by day or hour by hour, now she says down to a minute-by-minute battle.

"Any time that you lose a loved one every hour that goes by is an eternity," added Chief Arradondo.

Chief Arradondo says his detectives are working around the clock to get the shooters off the street. "They’re turning over every leaf, every stone to try to get that information."