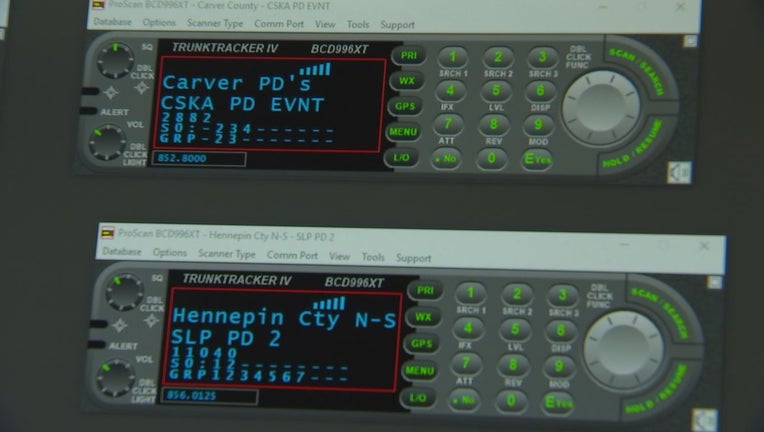 Scanner listeners won't be able to pick up a signal from some Hennepin County calls due to the change.

MINNEAPOLIS (FOX 9) - In an effort to protect both law enforcement and residents, the Hennepin County Sheriff's Office says it is moving to an encrypted radio system. The change also means people with radio scanners will no longer be able to hear 911 calls.

The Hennepin County Sheriff's Office says other cities, like Los Angeles and Denver, have already made this move. But, Hennepin County is the first in Minnesota to make the switch.

Scanner encryption in Hennepin Co. leaves scanner listeners without signal for some cities

In an effort to protect both law enforcement and residents, the Hennepin County Sheriff's Office say it is moving to an encrypted radio system. But the change means people with radio scanners will no longer be able to hear 911 calls.

For decades, concerned citizens have used scanners to follow police activity. Now one of the largest law enforcement agencies in the state is going radio silent to the general public.

"This is just making sure the information we don't want to get out doesn't get out," explained Hennepin County Sheriff Dave Hutchinson.

Earlier this week, Hennepin County Sheriff's Office began encrypting radio traffic from its dispatch center to deputies and officers for 24 other agencies in the county. Sheriff Hutchinson says a user advisory board has been looking at the change for the last four years to protect citizen's personal information and officer safety.

"I don't think people understand a lot of private stuff goes on the radio," the sheriff said. "They dispatch people's names, addresses, dates of birth. Not only is it sometimes embarrassing, but we're also talking about identity theft."

"I think the sheriff's position would be much stronger if he had specific instances and he doesn't seem to have any," said Don Gemberling of the Minnesota Coalition on Government Information.

Advocates for government access say encrypting law enforcement radio traffic is a solution in search of a problem, and police should be using technology to become more transparent -- not less.

"It's people's way in a democracy of making sure law enforcement is doing what it should be doing," Gemberling argued.

But, Sheriff Hutchinson says transparency shouldn't come at the cost of people's privacy and officer safety.

"It's unpopular, but I think we are doing it for the right reasons," Sheriff Hutchison said. "And I hope people will see that."

Sheriff Hutchinson says he is committed to transparency. In fact, he is asking the county board to approve body cameras for deputies in the next couple of weeks.