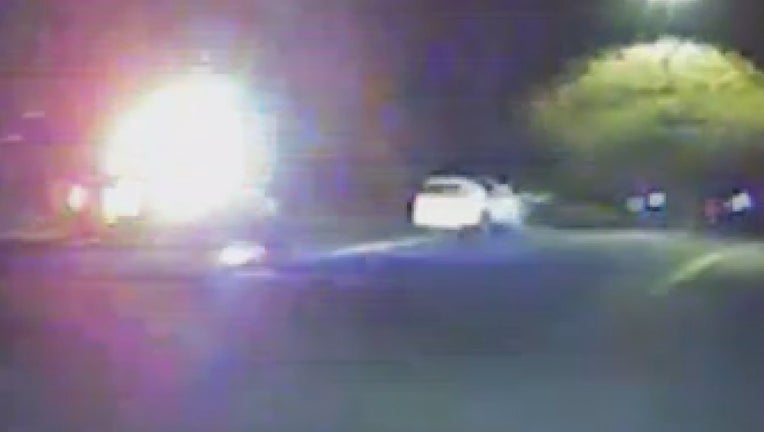 Rogers Police Chief Dan Wills said the chase started after a man in Rogers called police around 8:45 on the evening of October 9 saying two teens had broken into his home.

Chief Wills said the man had left his garage door open and his service door unlocked so the teens were able to get inside. He chased them out, took down the license plate number of the SUV they sped off in and called police.

Police learned the SUV the teens were driving was reported stolen in Minneapolis the day before. A nearby officer spotted the SUV and started following it. Police dash camera footage shows the car going through a red light.

“Obviously [it] shows they had no regard for the public and they had no interest in being caught or pulling over,” Chief Wills said.

Dash camera footage shows the SUV get onto the freeway, I-94, heading east. Police said the vehicle was traveling faster than 100 miles per hour. At one point Chief Wills said the SUV started going around 114 miles per hour.

As the SUV approached the border of the City of Maple Grove in I-94 officers from other departments took over the chase. According to police reports, the SUV exited the highway, ran another red light and started traveling down Bass Lake Road, East Fish Lake Road and other residential streets.

According to police reports, the SUV hit a set of stop sticks near an entrance to I-494. The SUV got on to I-494 and traveled several miles until their wheels were deflated and a wheel fell off. The chase ended on the side of I-494 near Rockford Road.

When the car came to a stop police say the driver had jumped from the driver’s seat into the back of the car. Police say it was at this point they learned there were eight teenagers inside the SUV.

“To learn that there were eight people jammed into this SUV was very shocking. Obviously, not everybody is wearing a seat belt at that time,” Chief Wills said.

Police also learned that some of the teens had warrants out for their arrest. Chief Wills said police also found items in the SUV that could be linked to other crimes.

He said the brazen burglary that happened in the late evening hours has shaken the Rogers community. Chief Wills is encouraging people to be vigilant and make sure garage doors are shut, doors are locked and cars are secure.

“It was very shocking that we have people as young as 13 committing first degree burglary and driving stolen vehicles. I sure hope that they obviously get the help they need,” Chief Wills said.

According to the Hennepin County District Attorney’s Office, all of the teens are now in the juvenile justice system. Three of the teens were 16 years old. Their charges have been made public. All three are charged with felony fleeing a peace officer in a motor vehicle.

Chief Wills said officers considered and followed the department’s high speed chase policy. He said they weighed the severity of the crime, the perpetrator’s disregard for others’ public safety, the amount of traffic on the road and the speed of the chase was suitable for officers to continue engaging in the chase.

“We obviously don’t like to ever get in a pursuit,” Chief Wills said. “If the conditions weren’t right, if the traffic was too heavy, if the speeds got to the point where it just didn’t make sense we would have terminated that pursuit.”