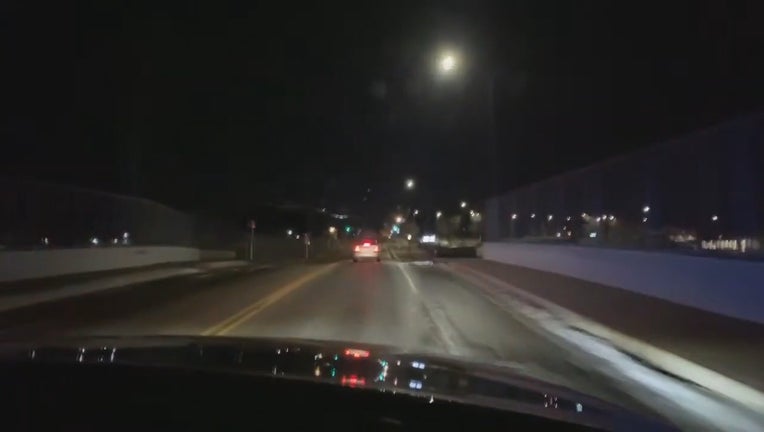 ST. PAUL, Minn. (FOX 9) - On Wednesday night, Ramsey County Sheriff Bob Fletcher was on patrol in the City of St. Paul during his "Live on Patrol" livestream, when he took over a stolen car chase for St. Paul Police who were unable to continue under department policy.

Under the St. Paul Police Department’s vehicle pursuit policy an officer can initiate a pursuit when they believe a person has committed or is about to commit a violent felony, or when the driving is "flagrantly reckless."

On Wednesday night, Ramsey County Sheriff Bob Fletcher was on patrol in the City of St. Paul during his Live on Patrol livestream, when he took over a stolen car chase for St. Paul Police who were unable to continue under department policy.

The Ramsey County Sheriff’s Office pursuit policy asks deputies to consider “the importance of protecting public safety and balancing the seriousness of the known or reasonably suspected offense” and the risks of pursuit.

The chase began when members of the St. Paul Police Department’s gang unit spotted a stolen car around 9:45 p.m. It was quickly turned over to Sheriff Fletcher and Pat Scott, a part-time crime analyst, who were livestreaming to thousands of followers on Facebook and YouTube. The video received more than 33,000 views.

Squad radio: "We can’t pursue, so we’re going to let you go in front of us."

Scott: "You want to broadcast?"

Fletcher: "Yeah you can broadcast, but let's play dumb for a little while."

Fletcher kept following the car from a distance without squad lights or the siren, which also violates the St. Paul Police vehicle pursuit policy. It does not appear to be a particularly fast chase, but the Volkswagen Jetta is at times swerving on the road.

In the McDonough neighborhood, the driver went down the wrong way on two, one-way roads.

Scott: "Going down wrong way, not sure what street this is."

Fletcher: "Leave that off, the wrong way part.

St. Paul Dispatch: "Just to clarify, no one is pursuing at this time."

At one point, the suspect lost control and drove up the curb into someone's yard. He then corrected and ended up back on the street.

Dispatch: "If the reason for pursuit is stolen only, St. Paul squads need to drop out now."

But the sheriff continued the chase down alleys, now with squad lights and siren. Eventually other deputies took the lead until finally, the car went into a parking lot behind a post office, without an exit, where the suspects were caught.

From start to finish it was a 16-minute chase, ending with three people arrested.

When the chase and arrest were over, Fletcher returned to the squad car and told Scott the chase was “exhilarating".

The driver is Luiz Reyes, who Fletcher said has gang affiliations and convictions for burglary and aggravated robbery. Fletcher also said on the livestream that the man had a Department of Corrections warrant out for his arrest.

But the Department of Corrections told the FOX 9 Investigators that Reyes was discharged from his previous sentence in 2019 and DOC "could not find a warrant authorization for this person."

In a statement, Fletcher defended the chase.

"St. Paul officers are familiar that our Sheriff's Department policy allows for pursuits in these situations," read his statement.

"There is a big difference between chasing someone the wrong way down a crowded interstate and following a vehicle down a short stretch (the one way) when there is no traffic at normal speeds," he continued. "The increase in carjackings and auto thefts, is in part driven by the criminals’ awareness that in some jurisdictions police officers are not allowed to pursue suspects.”

"Until we change that criminal mindset, we have no chance of reducing crime. Our policy is based on what I believe the expectations of our community are," Fletcher wrote.

A Sept. 17 Star Tribune article on the livestream included critics of the show, one who questioned why the sheriff is patrolling St. Paul and doing it for the entertainment value.