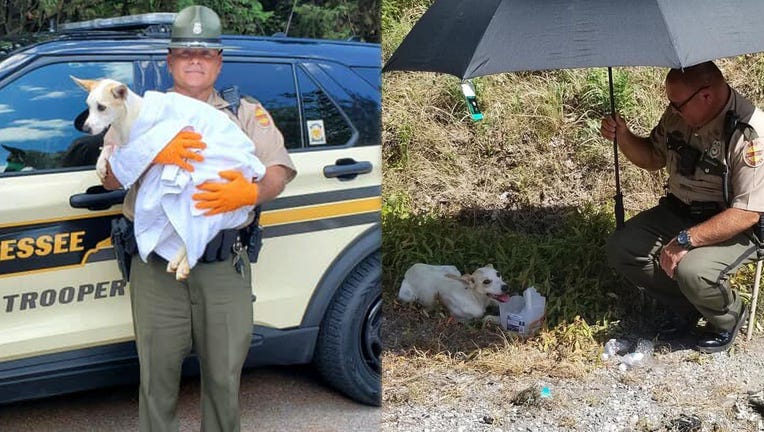 A Tennessee Highway Patrol trooper recently rescued a dog collapsed on the side of a highway in the sweltering summer heat, but little did he know that it would be the beginning of a special friendship.

Trooper Pumpy Tudors was alerted by a good Samaritan to the small dog on June 15, located on the side of Interstate 75 "parched and desperately needly water and shelter from the heat," according to the Tennessee Highway Patrol.

Tudors stepped in to offer water, the shade from an umbrella, and some snacks he had on hand. Tudors set up a chair beside the dog and worked to establish trust before eventually taking the panting pup to an animal shelter in Cleveland, Tennessee, to receive further care.

Temperatures reached upwards of 95 degrees Fahrenheit in the area that day.

"Pet owners, please make sure your pets are safe from the heat and have plenty of water," the Tennessee Highway Patrol said in a Facebook post.

"Trooper Tudors you are a hero! Thank you for so compassionately and skillfully helping one of the most helpless creatures. I hope you do get to adopt her," one person wrote.

"Thanks to everyone that helps take care of those in need. It breaks my heart to see these things but makes my heart happy to know some people are so kind to care for anyone or animal in need," another added.

After no one claimed the dog, Tudors officially adopted the dog and named her Princess, the Tennessee Highway Patrol said in a follow-up post.

"She is still receiving treatment at the facility until she can go to her #ForeverHome," the highway patrol wrote in an update on June 24.

A Tennessee Highway Patrol spokesperson told FOX Television Stations on Wednesday that Princess had officially gone to live at her new home with Tudors.

RELATED: Woman, son she put up for adoption find out they work at the same hospital