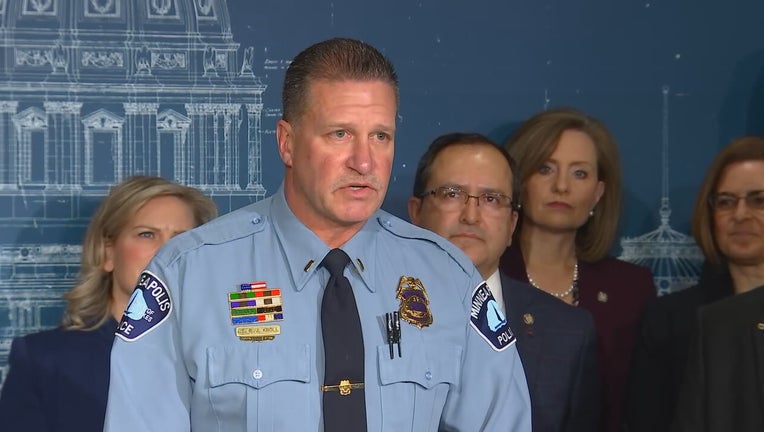 MINNEAPOLIS (FOX 9) - Minneapolis Police Chief Medaria Arradondo announced Wednesday he is withdrawing from contract negotiations on the unfinished contract with the police union and restarting an effort to identify troubled officers through early warning signs.

Chief Arradondo called the traditional contracts "antiquated" and said that "it's very clear we have to evolve."

In the weeks that followed the death of George Floyd in Minneapolis police custody, critics have called for Lt. Bob Kroll, the President of the Police Officers Federation of Minneapolis, to resign from his position.

At Wednesday's press conference, Arradondo was asked whether Kroll needs to step down, to which he simply replied that he is having "intentional conversations" with Kroll, without going into detail.

Minneapolis Police Chief Medaria Arradondo was asked Wednesday whether he thinks police union president Lt. Bob Kroll needs to resign. He said the two of them have been having serious conversations and there will have to be some decisions made going forward.

“I believe he knows my position," Arradondo said. "These are very serious convesations and there are going to have to be some decisions made moving forward."

When is asked if Kroll is willing to be a part of the solution moving forward, Arradondo said, "I care deeply about this city...and we have to look into our hearts and what’s in our best interest. I hope he does the same."

This is the first time Arradondo has spoken publicly since the majority of the Minneapolis City Council pledged over the weekend to dismantle the police department. Arradondo's announcement also comes after the City Council banned officers from using chokeholds while engaging with suspects.

Floyd died on May 25 after now-fired police officer Derek Chauvin pinned him to the ground, pressing his knee into Floyd’s neck as Floyd repeatedly cried out that he could not breathe. Chauvin is now charged with murder for Floyd’s death.

The three other now-fired officers who responded to the scene are charged with aiding and abetting.