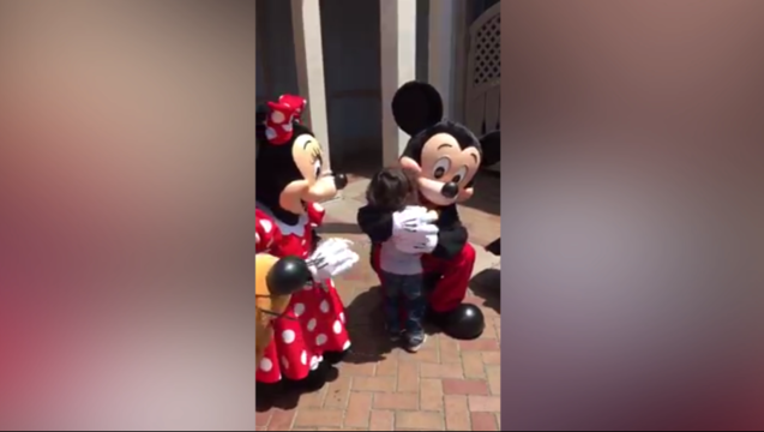 ANAHEIM, Calif. (FOX 11) - An adorable moment between a little boy who is deaf and beloved Disney characters was captured on video recently, making the theme park truly look like the Happiest Place on Earth.

The young California boy was greeted by Mickey, Minnie and Pluto at Disneyland, and the characters used sign language to communicate with him.

The child was visiting the theme park with his family in a visit that was organized by Olive Crest, a child abuse prevention and family restoration agency that serves at-risk kids and families throughout California, Nevada and Washington.

According to a representative with Olive Crest, the boy's family arranged to have an ASL translator with them at Disneyland, but the characters were not briefed about the visit before the boy got there.

The representative says the child was "ecstatic after meeting the characters because he didn't know they would speak his language."

According to Olive Crest, the caseworker said, "Guys, this kid is the most incredible child I've ever met. He is mostly deaf, so the ASL translator is behind him, signing to the characters so they can copy her and communicate with the little guy. He is not a big hugger, so that hug for Minnie is something special."

You can find out more about the organization that setup this adorable meeting at OliveCrest.org.