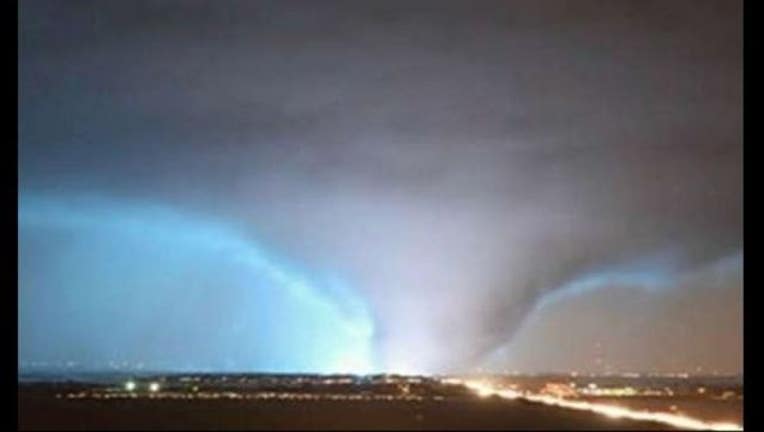 GARLAND, Texas (AP) — Tornadoes that swept through the Dallas area caused substantial damage and at least 11 people died either from the storm or related traffic accidents. Dozens of people were injured in the storms as well.

It's the latest of a succession of freakish winter-weather events across the country that could include heavy snow and massive flooding Sunday from north Texas through eastern Oklahoma, eastern Kansas, western Arkansas and parts of Missouri. Days of tumultuous weather in the Southeast have led to 29 deaths overall — those in Texas plus 18 total in Mississippi, Alabama, Tennessee and Arkansas.

The full extent of damage in Texas isn't yet known, though it stretched over about a 40-mile-long area from 20 miles south of Dallas to northeast of the city. The storm blew the roofs off homes, mangled vehicles, damaged churches, downed power lines, toppled trees and caused natural gas lines to burst.

Garland Police Lt. Pedro Barineau said Sunday morning that eight people have died and 15 were injured in Garland, which is about 20 miles northeast of Dallas. That death toll went up by three since Saturday night.

"This is a huge impact on our community and we're all suffering," he said.

Barineau said the single tornado hit about 6:45 p.m. and damage stretches across an area of 2 square miles, and was near the intersection of Interstate 30 and George Bush Turnpike, which is a major route in the region.

At least three people who died were found in vehicles, said Barineau, who also noted that some cars appeared to be thrown from the interstate, though it wasn't known whether that was the case for the people found in the vehicles.

About 600 structures were damaged, the majority of which were single-family homes. "Driving around the area, you can see that it's total devastation," Barineau said.

Three other people died in Collin County, about 45 miles northeast of Dallas, according to sheriff's deputy Chris Havey, although the circumstances were not immediately clear.

In the town of Rowlett near Garland, City Manager Brian Funderburk said Sunday morning that 23 people were injured, though the extent of their injuries weren't know, but that there were no deaths and no reports of missing people.

The Red Cross set up shelters for people whose homes were damaged by the storm.

"I think everyone understands now the gravity of what happened," Anita Foster, spokeswoman for American Red Cross of North Texas, said on WFAA television.

Passengers waiting for flights at Love Field, a major Dallas airport, were moved away from windows during the storm. Flights were temporarily halted from Dallas-Fort Worth International Airport. The Dallas Mavericks NBA game was delayed about half an hour because of the storm.

On the other side of Texas, a snowstorm accompanied by plunging temperatures, was expected to leave up to 16 inches of snow in West Texas and much of New Mexico through Sunday evening, according to NWS meteorologist Brendon Rubin-Oster in College Park, Maryland.

"It's going to be quite dangerous for anyone exposed to these elements," Rubin-Oster said.

In the Southeast, two more deaths linked to weather were reported Saturday in Mississippi, bringing that state's death toll from severe weather over Christmas to 10. Late Saturday, one death was reported in Alabama.

Flash flooding closed roads across Alabama and trapped motorists in rapidly rising waters. Ranager Tyler and his son waded into flood water Christmas night and used rope to pull an 11-year-old boy out after his family's car was swept away near Pinson, about 15 miles northeast of Birmingham.

"The little boy was hanging on to the back of the car," Tyler said Saturday.

The family's car was overcome with flood water and ended up in a ditch near Tyler's Pinson home. The rushing water separated the family as they got out of the car, he said, but the boy was later reunited with his family.

The flooding is the result of heavy downpours that have thrashed the southeastern U.S. since Wednesday, bringing record rainfalls in some areas.

Better weather was forecast for the Southeast on Sunday, and temperatures in the eastern third of the country could set numerous records highs, Rubin-Oster said. Washington, D.C., could see a record daily temperature of 73 degrees, New York City 65 —which would break a record of more than 50 years —and Orlando, Florida could tie a record of 86 degrees set in 1921.

This story has been corrected to show there have been 29 deaths from storms in the last week, not 21.