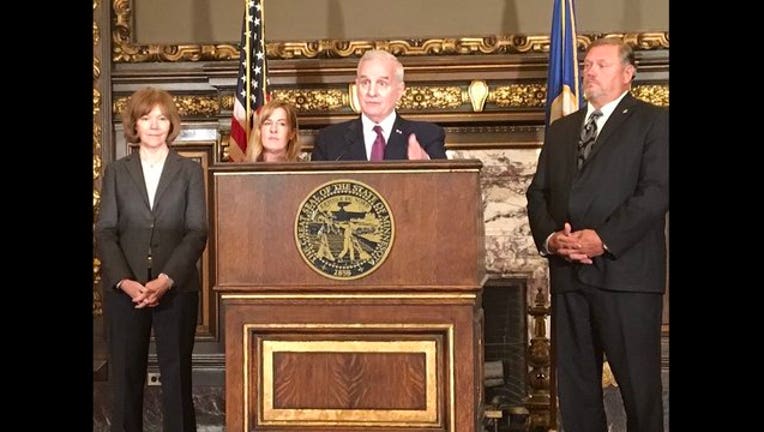 MINNEAPOLIS (AP) -- In the closing days of the 2017 legislative session, Gov. Mark Dayton fended off attempts to gut his signature clean water accomplishment, a requirement for buffer strips of vegetation between farm fields and waterways.

Dayton even got some things he wanted on the environment and outdoors fronts as he fought off other ideas he opposes. Several environmental groups say compromises in the final days of the regular session and special session weaken protections and they've urged him to veto the big environmental and natural resources budget bill. But that appears unlikely.

Some highlights of what lawmakers did and didn't do:

Agricultural interests fought hard to weaken the buffer requirements because of the burden on farmers. In the end, the deadlines for installing buffers on lands along public waters (November 2017) and for lands adjacent to public ditches (November 2018) didn't change.

The compromise between the Dayton administration and legislative leaders was that farmers and landowners who have trouble meeting the deadlines but are making good-faith efforts will get an eight-month reprieve while they work with their local soil and water conservation districts.

Efforts by the Minnesota Chamber of Commerce and its GOP allies to abolish the EQB failed when the proposal was dropped from the final version of the main environment bill.

The board includes nine agency heads and five citizens. The Chamber said the EQB duplicates other governmental functions, but the Dayton administration said the board is useful in coordinating environmental issues across agency lines and creates opportunities for the public to weigh in.

The bill did adjust the board makeup to add geographic diversity.

Fishing and hunting license fees, and state park, snowmobile and ATV fees will go up. The Department of Natural Resources sought the higher fees to shore up its Game and Fish Fund, which finances outdoors programs that hundreds of thousands of Minnesotans enjoy.

Fee hikes got little traction most of the session but suddenly appeared in the final version of the environment bill.

They also approved spending $64 million from state lottery proceeds to fund most of the rojects recommended by the Legislative-Citizens Commission on Minnesota Resources. They dropped or trimmed some to come up with money for the Conservation Reserve Enhancement Program, a voluntary program to pay farmers to take steps to protect and improve water quality. The state needs to put up about $95 million to get all $350 million in available federal funds.

A plan by wildlife managers to ban lead shot at state wildlife management areas was nixed. The environment bill bars the DNR from restricting lead shot for two years. The DNR is trying to protect wildlife from lead poisoning, but many hunters consider steel shot less effective than lead.

Minnesota has long required deer hunters to wear some blaze orange clothing for safety. Now hunters can opt for blaze pink instead. Supporters framed it as way to attract more women to hunting. Critics said blaze pink isn't as safe and scoffed at the idea that anyone will take up hunting just because they can wear pink.