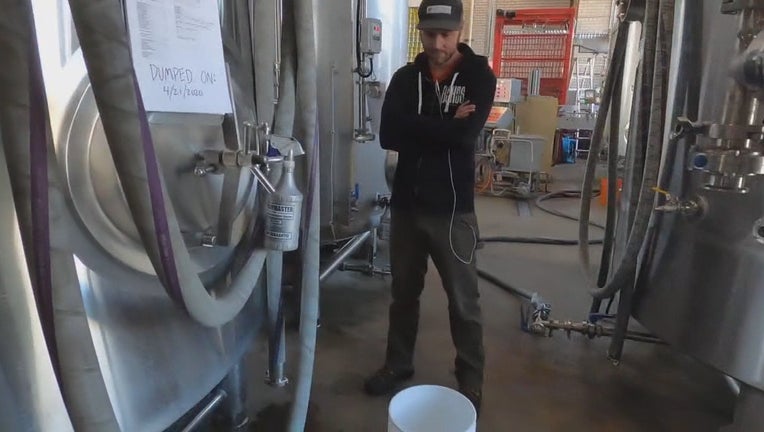 With breweries closed, some craft brewers are turning to dumping their beer amid the closures due to COVID-19. (Bauhaus Brew Labs)

MINNEAPOLIS (FOX 9) - The Minnesota Craft Brewers Guild says it's only a matter of time before some of your favorite breweries have to shut down if state leaders don't step in quickly.

John Donnelly, co-founder of Minneapolis-based Modist Brewing showed FOX 9 his large cooler, where he says thousands of dollars worth of beer and kegs are stacked high with no place to go.

Minnesota craft breweries are dumping beer due to coronavirus closures, and they're also calling for regulation changes.

“That’s what is going to sit," said Donnelly. "And we’ll end up dumping that at some point.”

The battle to fight the spread of the coronavirus has done a number on the state’s beer industry. The stay-at-home order, the closure of restaurants and bars and a strict limit on crowd size has left breweries with an abundance of suds they’d like to sell. So much inventory in fact, Bauhaus Brew Labs recently dumped a whole tank of beer.

“Definitely was not in the business plan,” said Donnelly. “Yeah, it’s scary, sad, disappointing. It is what it is. We’ve rolled with plenty of punches, but this is big.”

As breweries and tap rooms look to survive in the weeks ahead, industry leaders believe state liquor regulations are hampering their businesses, specifically, a ban on them selling standard four-pack and six-pack cans of beer on site. Customers can come and get a 64-ounce growler filled, but can’t buy a four-pack of beer totaling 64 ounces. Donnelly says that difference matters right now.

“It would help literally every brewer in town, in this state,” he said.

“The scary thing is a lot of these organizations that we have in Minnesota won’t be around and that’s sad,” said Sen. John Hoffman (DFL – Champlin).

State Senator Hoffman has taken note and sees no reason to limit breweries from selling beer in whatever vessel or form that will keep them afloat during this economic crisis.

“Maybe we do another small bill like we did that allowed restaurants to sell beer and wine? Do the same thing here,” said Hoffman.

For now, Modist will rely on liquor store sales as well as purchases of growlers and crowlers from their tap room bar front that remains open. The brewer received an emergency federal business loan to keep paying half its staff of 40 for the next two months, but Donnelly says beyond that, the future remains uncertain.