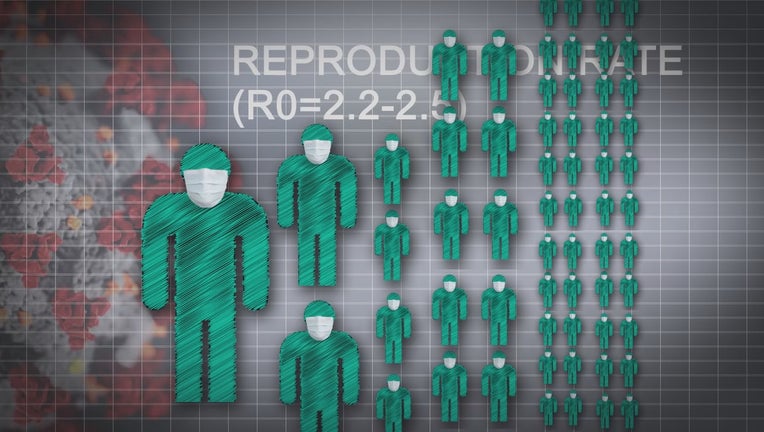 The coronavirus is believed to have a reproduction rate between 2.2 to 2.5, which means on average, every person infected with the virus will infect at least two others. (FOX 9)

MINNEAPOLIS (FOX 9) - At this point in the pandemic, there is a relentless momentum to the numbers.

“Right now, it's doubling in the community every five to seven days,” said Dr. John Hick, Medical Director for Emergency Preparedness for HCMC.

COVID-19: When is the tipping point?

At this point in the pandemic, there is a relentless momentum to the numbers. &nbsp;

HCMC, part of Hennepin Healthcare and Minnesota’s largest safety net hospital, has yet to see a single COVID-19 patient, but Hick said they will likely see the first wave of patients by the first week of April.

State health officials have been working with the University of Minnesota to develop a computer model that will predict the peak of the pandemic, and when hospitals will see the greatest number of patients.

“The modeling tells me how long until we reach ICU (Intensive Care Unit) capacity,” said Governor Tim Walz in a conference call Tuesday with reporters.

Governor Walz said the modeling, which he has been expecting for a few days, will allow him to determine what measures are most effective at changing social behavior. He said he is simply trying to “buy time.”

“What we’ve done so far is pushed out the peak,” said Walz.

Every epidemiological model makes a variety of assumptions that become part of a complicated mathematical formula to calculate the spread of the coronavirus.

There are a few key concepts that are important to understand.

The coronavirus is believed to have a reproduction rate between 2.2 to 2.5 (R0=2.2-2.5), meaning on average, every person infected with the virus will infect at least two others, and so on, and so on.

The incubation period is the time from when someone is infected with the virus to the point where they develop symptoms. That can be a wide range from 2 to 14 days, but the average for 95 percent of the population will be five days.

There’s also what’s known as the serial interval. That’s the time between when one person gets sick, and the person they infected becomes ill. Preliminary research recently published by the Centers for Disease Control said that is about four days (3.95 days).

But one study that looked the serial interval in Wuhan, China, where the outbreak originated, noted an issue that concerns epidemiologists: the role of asymptomatic spreaders. The study determined that some people were infected by those who had no symptoms.

Another critical variable is how many of those who become sick will require hospitalization. That number has ranged dramatically between 2 and 20 percent depending on the demographics and health of the population and the availability of medical care.

In Minnesota, health officials have predicted the attack rate – the percentage of people who will become infected – could be a range from 40 to 80 percent of the population over the next year.

Many of those assumptions that will be built into the Minnesota model are based on what’s happened in other countries and hot spots in the U.S., like New York, the Bay Area of California, and Washington.

“We are all just kind of holding our breath and we are also watching cities like Seattle which implemented controls fairly efficiently and rapidly,” said Dr. Hick, who said social contact needs to be reduced by 90 percent to be effective.