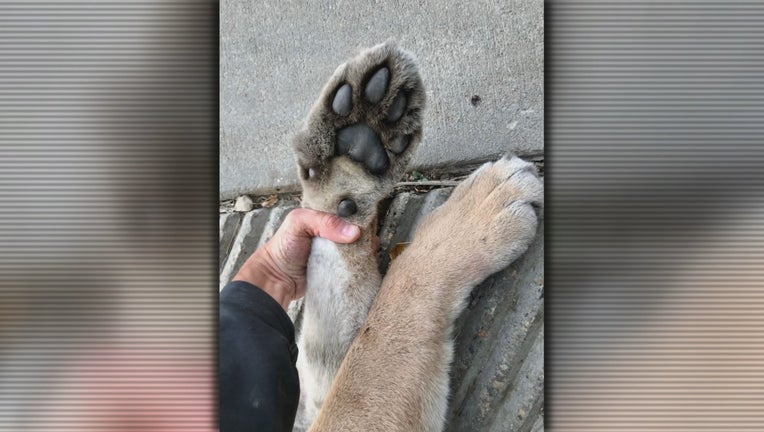 A cougar was fatally struck by a vehicle in Bloomington, Minnesota on Sept. 29, 2020. (Minnesota Dept. of Natural Resources)

BLOOMINGTON, Minn. (FOX 9) - While the discovery of a cougar in the Twin Cities metro certainly has people talking, big cat experts say it doesn’t mean there are more of them.

Tuesday, the Minnesota Department of Natural Resources shared a photo of an adolescent cougar that died after it was hit by a car near the I-494 35W interchange in Bloomington.

While the discovery of a cougar in the Twin Cities metro certainly has people talking, big cat experts say it doesn’t mean there is more of them.

“I think we have a few more than we’ve seen over the years, I don’t think we have a burst of population like you’ll see in Montana, Oregon and Washington, so I do think this was a transient cougar, an adolescent that got into an area where he didn’t know where to go,” said Tammy Thiess from the Wildcat Sanctuary.

Thiess says there have only been around 30 verified cougar sightings in Minnesota since 2007. The DNR added that each one they’ve tested or found dead has been a male - sign that there’s no established population here.

“It’s not a kitten, it’s not a pregnant mom, so we don’t foresee that we’re going to see another cougar sighting in that area in the short term,” said Thiess.

Male cougars can travel hundreds, even thousands of miles. Those spotted in Minnesota often come from the Dakotas.

“Based on the genetics, the sourced population is from the western states so western South and North Dakota and Nebraska are from the closest established populations are,” said Dan Stark with the DNR.

The experts stress one cougar does not mean there are more.

“What’s interesting is soon as we see one article like this and one cougar it will almost be like alien sightings,” said Thiess. “I’ll get email from all over the state and that’s not how cougars work. They don’t drop in numbers of 20s or 100s.”