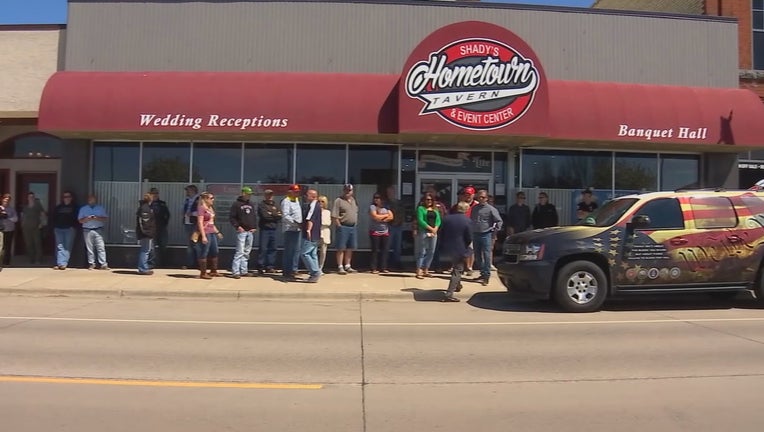 Supporters gathered outside Shady's Hometown Tavern in Albany, Minnesota before the owner decided not to reopen early. (FOX 9)

ALBANY, Minn. (FOX 9) - The debate over the potential opening of a small-town bar and events center in Stearns County moved from Albany’s Railroad Avenue on Monday to a virtual courtroom on Friday. Attorney General Keith Ellison joined in on the proceedings.

“COVID 19 is a global pandemic that has spread throughout the United States and reached every corner of Minnesota,” said Jason Pleggenkuhle, Assistant Attorney General.

Controversy over Albany bar heads to the courtroom

The debate over the potential opening of a small-town bar and events center in Stearns County moved from Albany’s Railroad Avenue on Monday to a virtual courtroom on Friday.

The Attorney General and his office attempted to fully enforce the governor’s executive order that shut down bars and restaurants to on-site food and beverage service to protect Minnesotans from the coronavirus.

“The Governor here was not acting pretextually or with some animus towards bars and restaurants when he issued executive order 20-56, he was acting in order to protect public health and safety to slow the spread of a deadly virus,” said Pleggenkuhle.

The legal team for Shady’s Hometown Tavern and its owner Kris Schiffler argues the governor is out of line by keeping bars and restaurants closed, while allowing big box stores like Walmart to operate.
Schiffler had planned to open Shady’s this week despite the current pandemic orders, but backed down when the state obtained a temporary restraining order, which kept his doors shut. His attorney insists they can operate safely while following strict federal health guidelines.

“Bar, restaurants in out-state Minnesota often are the only place people have to meet," said Gary Leistico, Schiffler’s attorney. "They talk politics, they talk religion, caucuses are held and right now, essentially under the governor’s order if they simply put ‘Shady’s Hardware Store’ on the outside, they could be open for business, people could go into the store."

Supports of Shady's Hometown Tavern yelled at a news reporter who was wearing a mask, while he was covering the story about the bar that planned to reopen despite the governor's order.

The governor has allowed take-out food and off-site beer and liquor sales and outdoor dining will be permitted starting June 1. Schiffler believes that’s not enough for his business and others like his to survive.

Stearns County Judge Shan Wang announced at the end of the 90-minute Zoom hearing, he’ll have a written ruling “sooner, rather than later” given the urgency of the situation.