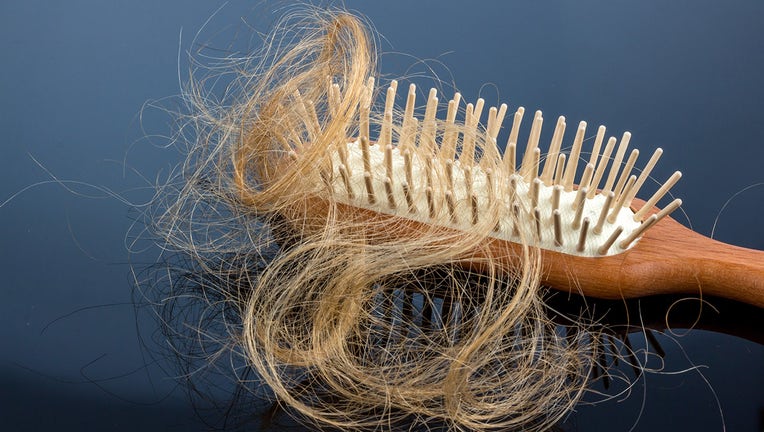 FILE - This photo shows hair on a brush

LOS ANGELES - A nationwide class-action lawsuit was filed against beauty conglomerate Unilever in November claiming that some of its Tresemmé products were allegedly causing hair loss.

"Plaintiff purchased the Products because of Unilever’s uniform false representation that the Products would smooth her hair and coat it with Keratin, a protein found naturally in hair," the lawsuit read. "The Products contain an ingredient or combination of ingredients that causes significant hair loss and/or scalp irritation upon proper application."

According to ChemicalSafetyFacts.org, DMDM hydantoin is a preservative found in cosmetics and personal care products, that works by slowing and preventing spoilage in products such as shampoos and hair conditioners, and in skin care products like moisturizers and makeup foundations.

And according to the website, the product is considered safe.

"DMDM hydantoin is safe as a cosmetic ingredient at current normal levels of use in products, according to scientific experts at the Cosmetics Directive of the European Union as well as an independent Cosmetic Ingredient Review panel," ChemicalSafetyFacts wrote. "To put formaldehyde exposures from DMDM hydantoin in personal care products into perspective, the tiny amount of formaldehyde released from a formaldehyde donor when shampooing your hair is about equivalent to the amount of formaldehyde naturally occurring in one medium-sized apple or pear."

But the lawsuit claims that formaldehyde has harmful reactions when absorbed into skin.

"Formaldehyde is a well-known human carcinogen that can cause cancer and other harmful reactions when absorbed into skin. DMDM hydantoin has been used a preservative in Unilever products for more than a decade; however, the use of DMDM hydantoin as a preservative is an entirely unnecessary risk because various safer natural alternatives exist. As such, the Products are rendered dangerous and unsafe for sale as over-the-counter hair smoothing shampoo products," the lawsuit says.

The lawsuit claims that the defendants failed to properly warn consumers of the risks and dangers to the use of the ingredient on the hair and scalp "even well after Defendants knew or should have known of the Products’ hazards."

This isn’t the first time the safety of the ingredient DMDM hydantoin has been called into question.

The lawsuit mentioned that Suave, also owned by Unilever, recalled its Keratin Infusion products in 2012 in light of complaints that they caused hair loss and irritation. The line included the ingredient DMDM hydantoin.

"Despite having public knowledge since at least 2012 that DMDM hydantoin, as a formaldehyde donor, can cause or contribute to hair loss and scalp irritation, Unilever continued to proudly include this ingredient as a preservative in its products, and even goes so far as to represent to the public that DMDM hydantoin is safe for use in its hair care products," the lawsuit says.

The class-action lawsuit gained significant momentum on social media platforms in November and December after several videos were released focusing on the claims.

"Consumer safety is always our top priority and all TRESemme products are rigorously assessed to meet stringent safety standards. While we do not comment on pending litigation, DMDM hydantoin is widely used in the beauty industry and has been confirmed by health authorities to be a safe and effective preservative," Tresemmé wrote.