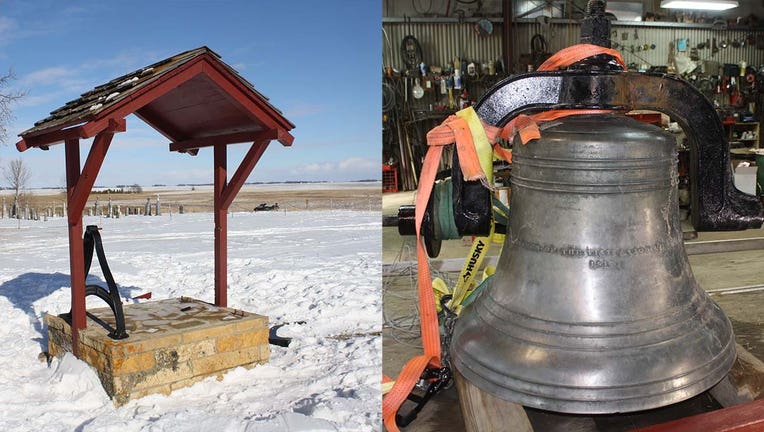 Two people have been charged for stealing a bell from the Swan Lake Catholic Church in Brighton Township, Minnesota. (FOX 9)

NICOLLET, Minn. (FOX 9) - Authorities say they tracked down the thieves who stole the large bell displayed outside the old Swan Lake Catholic Church in rural Minnesota.

The Nicollet County Sheriff's Office received a report of a large bell found in a ditch around 10 a.m. Thursday, Jan. 27 on 501st Avenue, north of the Fort Road in Brighton Township. The bell and the display area at 49864 Fort Road sustained extensive damage from the theft, authorities say.

An investigator saw a suspicious vehicle in the area pulling an empty trailer and found two people in the vehicle. While speaking to the pair, the investigator noticed tools, straps and ropes in the trailer that were similar to those left in the area of the stolen bell. He arrested the 38-year-old man and a 41-year-old woman at the scene.

Investigators also connected the pair to a burglary in a garage near the site where the church bell was stolen.

Travis John Carlson and Tonia Lee Marsh from St. Peter, Minnesota have since been charged with felony theft, attempted theft and third-degree burglary. Authorities They are being held at Nicollet County Jail.