Child tax credit payments begin: What you need to know

The Internal Revenue Service will begin to issue payments to parents under President Joe Biden's expansion of the child care tax credit issued to all Americans with minor children. The payments, which begin July 15, are expected to include at least 39 million parents and 65 million children. The program was approved by Congress as part of the most recent stimulus package related to the COVID-19 pandemic.

WASHINGTON - Families eligible for the expanded child tax credit as part of the Biden administration’s American Rescue Plan will receive the last payment on Dec. 15, though more could follow in the future — pending congressional moves.

The expanded child tax credit payments could potentially be extended into 2022, but those payments are tied to President Joe Biden’s social and environmental spending bill which has stalled in the Senate.

One reason for the delay in passing the spending package is because the Senate is evenly divided and Republicans oppose the legislation unanimously. One of the Democratic party’s final holdouts, Sen. Joe Manchin, has been pushing for months for Democrats to curb the bill’s size and drop some initiatives, including one requiring paid family and medical leave.

Manchin said that he’s still not ready to back his party’s $2 trillion social and environmental legislation, then talked to Biden on Monday as party leaders scrambled for a pathway to advance the long-stalled package — preferably by Christmas.

The West Virginia lawmaker declined to describe his telephone conversation with the president, saying he and Biden are "talking about different iterations" and saying "anything’s possible" when asked if they could reach a deal by the holiday.

In earlier comments to reporters, Manchin did not specifically threaten to vote against the legislation or say he opposed the goal of Senate Majority Leader Chuck Schumer, D-N.Y., to approve a compromise by Christmas. But his stance underscored that the White House and Senate leaders still must make concessions to nail down Manchin’s support. 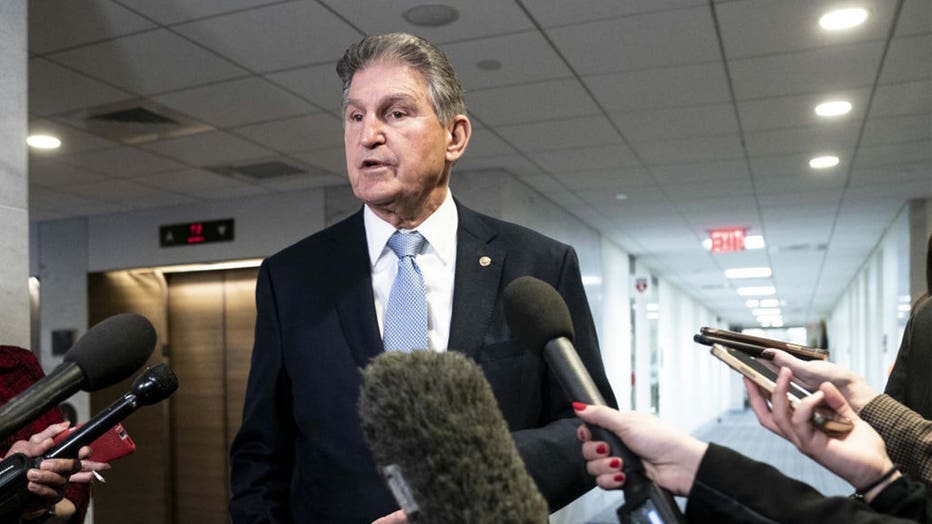 FILE - Sen. Joe Manchin, a Democrat from West Virginia, speaks to members of the media outside of his office on Capitol Hill in Washington, D.C. CREDIT: Sarah Silbiger/Bloomberg via Getty Images

One reason for Democrats’ urgency is that unless the measure is approved by Dec. 28, the IRS won’t have time to prepare checks due Jan. 15 to millions of families that receive the child tax credit, Senate Finance Committee Chairman Ron Wyden, D-Ore., has said.

"The enhanced tax credit has enabled parents across the country to pay for food, clothing, housing, and other basic necessities and is expected to lower the number of children experiencing poverty by more than 40 percent as compared to child poverty levels in the absence of the expansion," according to the Center on Budget and Policy Priorities.

Should the payments stop due to the Senate’s stalled talks, an estimated "9.9 million children are at risk of slipping back below the poverty line or deeper into poverty," the CBPP added.

Meanwhile, roughly $15 billion has been sent to 36 million families as of November, the Treasury Department and IRS said in a joint statement. The money is expected to reach some 60 million children.

The monthly installment, worth up to $300 per child, was issued via direct deposit for most families beginning on Nov. 15, part of a program authorized as part of the stimulus bill that Democrats passed without any Republican votes in March.

RELATED: Expanded child tax credits begin to roll out: Here’s how it works

If families earn too much to qualify for the sweetened tax credits, they can still receive the $2,000 credit for their children if their income level is below $200,000 for individuals and $400,000 for married couples.

There’s no limit on the number of children who can receive the credit per family.

A free calculator from Omni enables individuals to see how much money they can expect to receive.

The IRS has distributed half of the credit as an advance on 2021 taxes in six monthly installments, worth $250 to $300 per child. The remainder will come when parents file their 2021 tax returns next April.

Families who preferred to receive a lump-sum payment when they file their tax return in 2022 could use an tool unveiled by the IRS in June.

Parents who have provided the IRS with their bank account information in order to receive a tax refund receive the payment via direct deposit. Otherwise, parents receive the money as a paper check.

The IRS began paying out the credit on July 15. From there, the agency has delivered the monthly payments on the 15th of each month through December 2021.