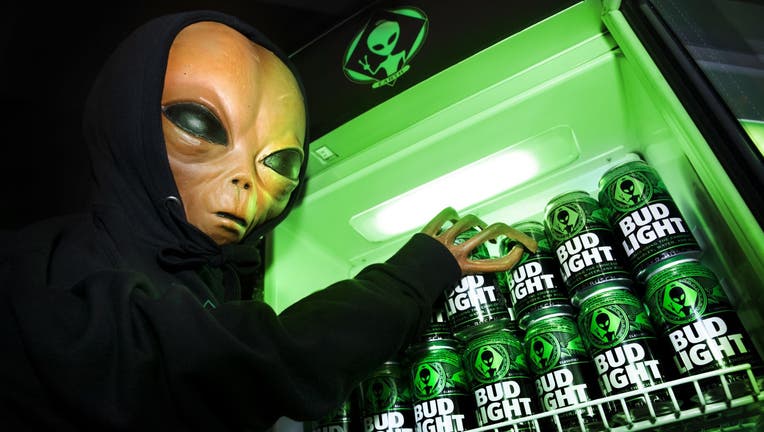 Bud Light wants everyone — including extraterrestrials — to know that the company will still be present at the Sin City event. (Bud Light)

LAS VEGAS - (FOX NEWS) -- Bud Light is still hoping to supply beer for aliens, even if the "Storm Area 51" event is canceled. And this time, the company has special plans in store for regular old Earthlings as well.

Bud Light had previously pledged (albeit in good humor) to give a free beer to any aliens that managed to escape Area 51 during the now-canceled "Storm Area 51" event, originally organized on Facebook in an effort to give attendees a chance to "see them aliens."

The original “free beer for escaped aliens” announcement came in July, when the viral "Storm Area 51" raid was still months away. Since then, the event, which started as a joke, had morphed into an actual alien-themed festival dubbed Alienstock — which was set to take place between Sept. 20-22 — but that, too, was canceled when the event's creator pulled out over safety concerns, saying he didn't want to be involved in "Fyre Fest 2.0." With so much interest in the site, however, an "Area 51 Celebration" was organized in Las Vegas, instead.

Now, Bud Light wants everyone — including extraterrestrials — to know that the company will still be present at the Sin City event. And according to a press release, Bud Light is bringing an “alien-friendly fridge,” which will be staged at the Luxor Hotel and Casino, and “reserved exclusively for aliens.” What's more, Bud Light says the fridge can only be opened by an "alien finger scan," whatever that means.

The company will also be producing the limited-edition alien-themed Bud Light can, which they previously teased in July. (Initially, Bud Light said they would only make the can if their July announcement was retweeted 51,000 times. While that goal fell short — the announcement was retweeted about 41-thousand times — the company confirmed it will still release the special cans in select states.)

The company's latest press release also contains a statement from an anonymous "a Bud Light operative" on its hopes for the Las Vegas event.

"The way we see it, we’d much rather people crack open a crisp Bud Light with alien visitors rather than storm Area 51," the "operative" said. "Nothing says we come in peace like sharing a beer with friends from another place or another galaxy. We promised to have beer waiting for any alien that wants it and we plan to deliver on that promise. Our hope is that humans stock up too because you never know when you might need some Bud Lights to welcome intergalactic neighbors.’”

Bud Light fans with no intention to travel to Las Vegas can still find the special-edition cans in Nevada, Arizona and California," Bud Light confirmed. East Coasters, meanwhile, will just have to get themselves abducted by party-animal space aliens if they hope to enjoy some intergalactic drinks.