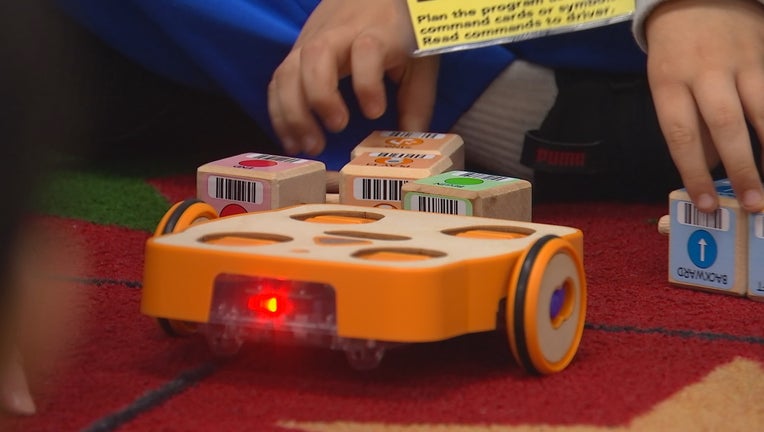 The robot allows the kids to learn about coding while having fun.

BLOOMINGTON, Minn. (FOX 9) - As the demand grows for workers in the tech sector, schools in Minnesota are taking steps to give their kids an early introduction to computers and robotics.

At Indian Mounds Elementary School in Bloomington, students are learning the fundamentals of computer science as early as the first grade.

As the demand grows for workers in the tech sector, schools in Minnesota are taking steps to give their kids an early introduction to computers and robotics.

The school's program utilizes a form of physical computing: There are no keyboards or screens. Lessons are instead built around a toy robot named KIBO.

"The best part about KIBO is that it’s hands-on, so the 6-year-olds are literally taking the blocks, putting them together, and seeing the results of what they’ve coded firsthand," said computer science teacher Whitney Determan.

Through problem-solving, teamwork and perseverance, these young students are building programs that allow KIBO to move and even speak.

"Just to see their programming and coding come to life is really unbelievable for them," explained Determan.

For many of the students, each lesson brings new opportunities.

"We keep finding out things to do with it and we made him have a hat, and a circle around the hat and it has a telescope and a recorder thing," said Khalid.

"You can learn new things and we can create stuff," added student Noela Anderson.

A resource that could someday be beneficial to these young students outside of the classroom.

"This is the future and that’s why it’s so important that we’re starting it in Bloomington right now," said Determan. "So we’re hoping that we’re going to open up so many possibilities for their future, if this is the route that they want to go."

The district says it has plans to expand the program to more grade levels in Bloomington.