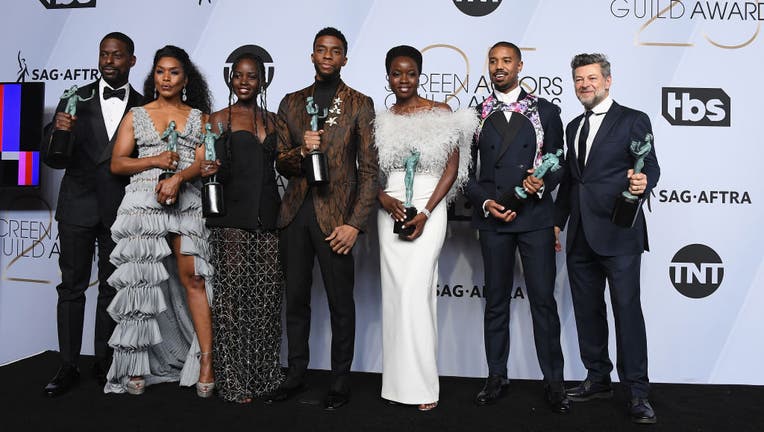 LOS ANGELES, CA - JANUARY 27: The cast of ?Black Panther?, winners of the Outstanding Performance by a Cast in a Motion Picture, poses in the press room during the 25th Annual Screen Actors Guild Awards at The Shrine Auditorium on January 27, 2019 in

The trailer features a lyrical motif of "We Gon' Be Alright" from Kendrick Lamar’s song, "Alright." The video also includes images of Wakanda’s environments and what appears to be a funeral, with many Wakandans dressed in white.

The trailer reveals that the film will follow T'Challa's remaining family as they appear to cope with his loss.

Writer and director Ryan Coogler reflected on the death of the first movie's star actor on stage at the Comic-Con event. Coogler had worked on the first "Black Panther" movie.

"It’s going to be hard to follow that up, but we’ll try," Coogler said. "It’s been five years since I was here. I sat about there and we premiered the first footage from ‘Black Panther 1,’ and sitting next to me was our T’Challa, the late great Chadwick Boseman."

Much of the original movie's cast will be returning for the sequel, including Angela Bassett, Lupita Nyong'o, Danai Gurira and Letitia Wright.

Boseman was privately undergoing countless surgeries and chemotherapy to battle colon cancer, according to a family statement announcing his death at age 43 on Friday.

"It’s a blessing. We’ve all grown so much as a family, and it feels great to see you guys and honor big bro at the same time," Wright said.

Meanwhile, Michaela Coel, Dominique Thorne, Alex Nivilani, Mabel Cadena and Tenoch Huerta will all join the series as newcomers for the upcoming film.

"Black Panther: Wakanda Forever" will be released in theaters in the U.S. on Nov. 11.