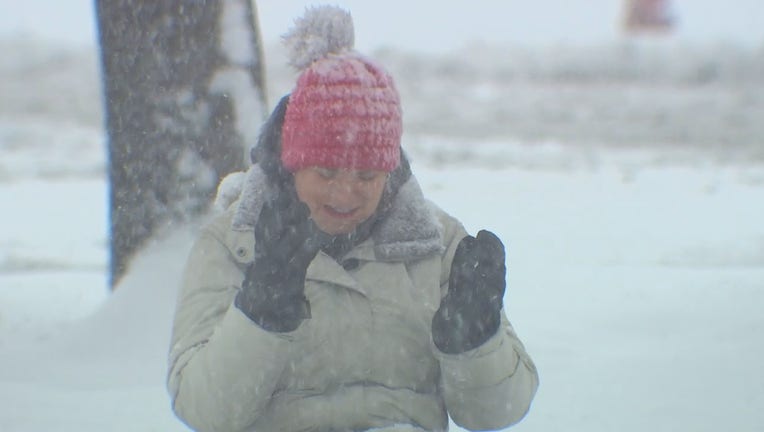 EDEN PRAIRIE, Minn. (FOX 9) - Some hearty Minnesotans were out enjoying the first big snow of the year, but FOX 9’s Karen Scullin was not one of them.

For Karen, today’s snow was wet, heavy and, in her words, “yucky.” She talked with some Minnesotans who did not agree.

FOX 9 Reporter Karen Scullin hates the snow, but she caught up with some heartier Minnesotans who disagree.

“It’s beautiful. We enjoy the winters here,” said Tianna Gangloss, of Richfield. “It’s a bit cold, but we deal with it.”

“I think it’s good to get prepared early,” said Warren Ackley, of Fargo, North Dakota, who described himself as “North Dakota tough.”

Bill Bettes, of Minneapolis, called the snow “an inconvenience,” but Grant Tufto, of Montevideo, said Tuesday’s snow was “a little disappointing.”

“I think us as Minnesotans aren’t quite over summer yet,” Tufto said. “So, I haven’t seen a snowstorm this early probably in my lifetime. I’m a little disappointed for a cold Halloween, I’ll say that.”

“It makes the country, the city look so beautiful, so beautiful,” said Emebet Alemu, of Edina. “Yeah, I love it.”

Although Karen disagreed with most of the people she spoke to Tuesday, she admitted that she loves that others appreciate the snowy weather.

“I love my Minnesota peeps, but this storm needs to slow its roll,” Karen said. “We’ve been going nonstop now for hours and a lot of us need a break!”