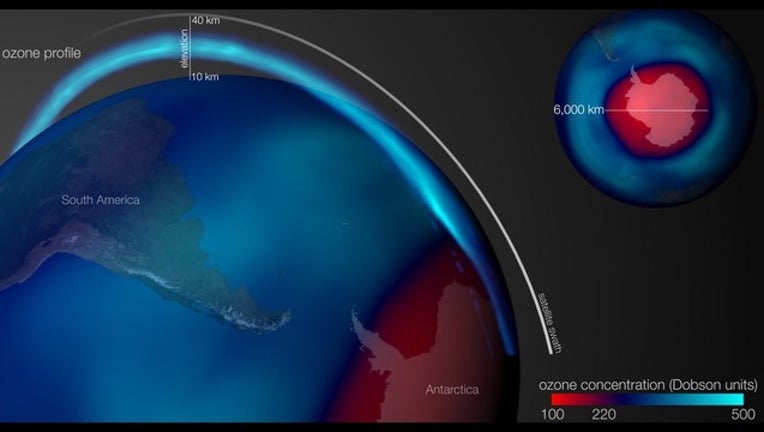 KMSP - Scientists from the National Oceanic and Atmospheric Administration (NOAA) and NASA announced that the Antarctic ozone hole was much larger this year than in recent years.  At the beginning of October, the ozone hole expanded to its peak of 10.9 million square miles, or an area roughly the size of North America. This is about 2 million square miles above the 21st century average.

Yes, here’s how ozone works.  O3, which is what ozone is molecularly (remember that oxygen is O2), is produced and attracted by a combination of heat and the suns radiation.  So wherever there is more heat and solar radiation, that’s where you find more ozone.  It typically lives in the Stratosphere, but you can get ozone at the surface as well on really hot days… that’s why you will sometimes hear of ozone advisories in some of the big cities across the globe during the heart of the summer.  Unfortunately, ozone is toxic to humans when breathed, so we need it to shield us from the sun, but we also don’t want to breathe it.  There is always more heat and radiation near the equator, so the stratospheric ozone levels are huge around the equator and often very small in the North and South Pole regions.  But with even colder than normal temperatures in the South Pole this winter (Northern Hemisphere summer) even more ozone was lost to the equator than normal leaving a bigger hole.

Scientists first discovered the ozone hole back in the 1980’s.  While it is likely something that has always been there to some extent, especially during the ice ages when the poles were even colder, the heavy use of chlorofluorocarbons from hairspray and other spray chemicals drastically expanded the hole because they eat away at O3.

O3 is very important to life on Earth because it soaks up additional heat and radiation from the sun that the ionosphere can’t reflect.  This is why temperatures actually rise in the Stratosphere before heading out into space, and also what causes the former space shuttle to heat up so drastically as it enters the planet.  Without O3 in the Stratosphere, it’s likely nothing on Earth would survive.

Here’s the good news… because the use of chlorofluorocarbons was banned in the 90’s, there is no longer anything (that we know of) eating away at our stratospheric ozone so the hole is expected to eventually get filled back in.  The problem is that stratospheric ozone takes an enormous amount of time to develop, which means this hole isn’t going to go away overnight.  Recent studies suggest that the hole maybe repaired entirely by the start of the next century… yes, that’s year 2100.