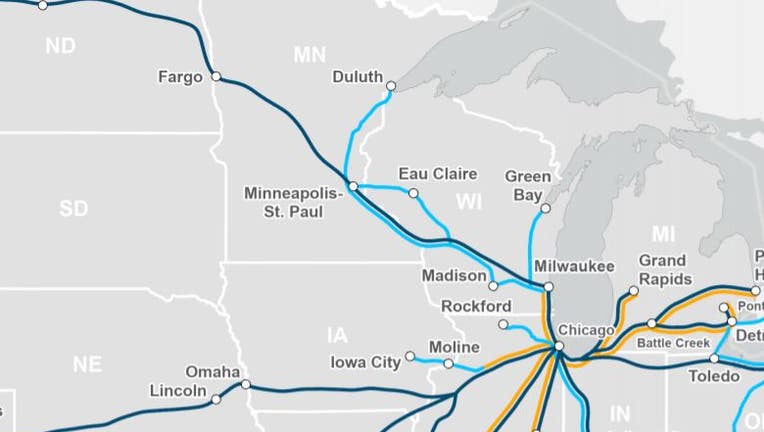 Amtrak's proposed route system in the upper Midwest. The light blue lines denote new routes if the president's infrastructure plan were to be passed by congress. (Amtrak)

According to the 15-year plan, which the passenger rail provider calls Amtrak Connect US, more than 30 new routes would be created, including the Duluth, Madison and Eau Claire connections.

In Wisconsin, passengers could also Amtrak from Milwaukee to Green Bay in a new route.

Currently, Amtrak’s Empire Builder line runs from Chicago to the Twin Cities and continues on through North Dakota and Montana before reaching Seattle.

The company anticipates the new routes and upgrades would increase ridership by 20 million. In 2019, 32 million riders took Amtrak trains on routes around the country.

Elsewhere in the country, some major American cities would also receive better Amtrak service. In cities like Houston, Atlanta and Cincinnati, the service is "inadequate", according to Amtrak. The trains there only stop once a day and often in the middle of the night.

The cities of Las Vegas, Nashville, Columbus and Phoenix currently have no Amtrak service at all.

Both Amtrak and the president are calling on Congress to approve the infrastructure plan before any of these changes can be implemented.