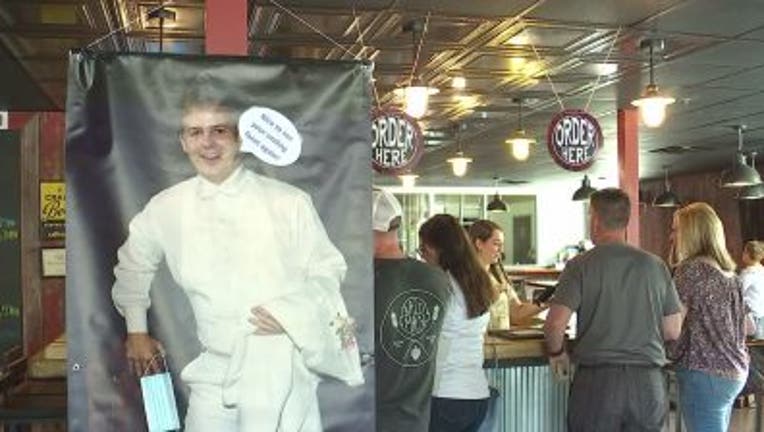 A hallmark of this community's annual ALS fundraiser is a life-size cardboard cut-out.

WACONIA, Minn. (FOX 9) - Down the street from the Town Ball Tour and on the same day as Major League Baseball also pushed awareness of ALS, an ALS fundraiser took place in Waconia, Minnesota.

Just two miles east of Waconia ballpark a fundraiser with its own baseball ties was underway. Emiliee Kadrie lost her dad in 2014 when he was just 49.

Just a few miles from the Town Ball Tour and on the same day as Major League Baseball honored Lou Gehrig, some Waconia residents helped raise money for a local family affected by ALS.

Dave Schimschock survived more than two years after his ALS diagnosis. Many, though, don’t make it that long.

"There’s nothing you can do about it when you get ALS, so I think it’s hard for people to talk about, but that’s what needs to happen to get that out there and to get more research for it," Kadrie said. "And to become a disease that you can beat."

Just after he died, the family began an ALS fundraiser.

Wednesday’s, at Waconia Brewing Company, is now the eighth. Each year, a life size picture of Schimschock welcomes guests with a new quote.

Wednesday, it said, "Glad to see your smiling faces once again without a mask."

John Wartman and Schimshock were friends since childhood.

"I’ve talked to a few people and they say, we know that there’s a cure on the shelf someplace. There’s a cure out there. We just don’t know how to go up and grab that cure yet," Wartman said.

On the TV at the brewery was evidence of new hope to push research and find a cure as all teams in Major League Baseball wore an ALS patch for the first-ever Lou Gehrig Day. Gehrig died 80 years ago of ALS.

Each year, the fundraiser benefits a local family. This year, it’s Doug Miller, of Plymouth, who was diagnosed just over one year ago.

For many at the event, it is frustrating that little progress has been made as far as treatments or a cure for ALS, but they hope baseball can help.