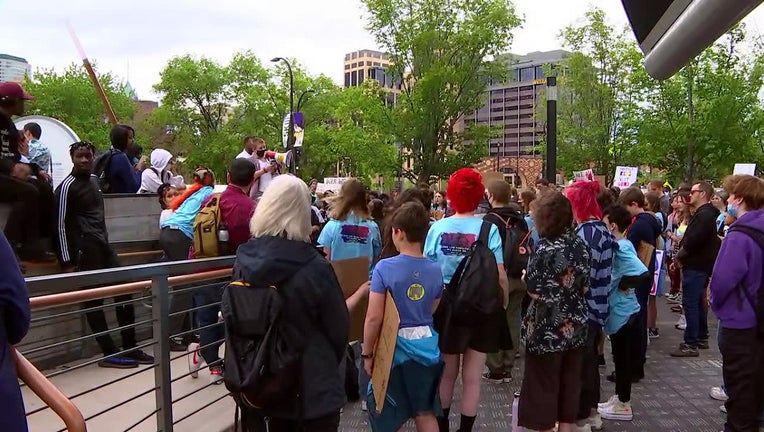 Students are calling for a number of changes to prevent what happened in Uvalde, Texas from happening again. (FOX 9)

(FOX 9) - Students in Minnesota took their message to the streets on Tuesday after the shooting in Uvalde, Texas last week has left everyone shaken.

Those students walked out of class Tuesday afternoon to protest gun violence and ask lawmakers to make changes to prevent another tragedy. They may be young but they want their voices to matter and they want lawmakers to listen.

Students across Minnesota staged a mass walkout coordinated in part by MN Teens Activists Tuesday in protest of numerous aspects in the wake of a shooting in Uvalde, Texas.

"It made me feel sad because I don’t know the government isn’t doing anything to stop gun violence, so we got to protest," said Sihaam Hussein, who goes to Andersen United Middle School. "And I was sad kids lost their lives and they’re so young."

The non-profit Minnesota Teen Activists say students are walking out of class with the hope that one day it is safer to stay in.

"So, there today you see young people walking out of class not to defy teachers but to stand up for their own rights to say our lives matter we have hopes and dreams we deserve to live," said Jerome Treadwell of Minnesota Teen Activists.

Organizers came up with a list of demands including a student safety statewide advisory committee. They want the number of active shooter drills reduced to minimize any trauma, a mental health assessment for students at beginning of each school year with resources ready to go, and a ban on AR-15s -- but, if not, mandatory training and registration.

The students told FOX 9 that the Texas shooting made them scared for themselves but also for the little ones.

"I feel scared because I have a little brother and I be scared of what would happen to him if that ever happens at his school and his friends," said North Community High School student Keya Lynnbell.

Whether grade school, middle or high school, they all were there for the same reason, because they know what happened in Texas can happen here.

"We just feel like we should be here for support," said J.T. Toney, a student at North. "Like no little kid, nobody should ever have to go through gun violence, especially little kids."

Students indicated there would be more protests and rallies in the near future.