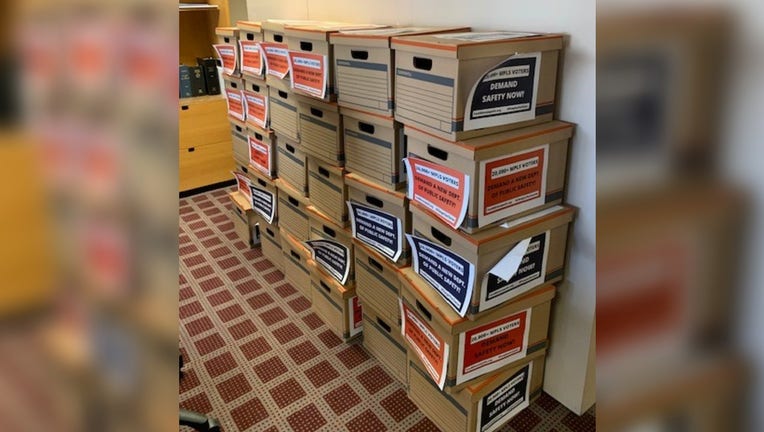 Activists with Yes 4 Minneapolis dropped off 30 boxes of signatures to a petition to replace the Minneapolis Police Department with a public safety department. (Minneapolis City Clerk)

MINNEAPOLIS (FOX 9) - Community activists delivered stacks of boxes Friday to the Minneapolis city clerk's office to file a petition to amend the city charter in order to replace the Minneapolis Police Department with a public safety department.

Following the death of George Floyd, there's been a community push to defund or disband the Minneapolis Police Department.

Activists say the petition is a step toward changing public safety and policing in the city.

The 30 boxes now standing in the city clerk's office mark the first step of the process for a petition to amend the city charter. According to the clerk, Yes 4 Minneapolis wants to put the amendment on the ballot at the general election on Nov. 2.

The city clerk received the petition on behalf of the Charter Commission and will formally present the petition at the next commission meeting on Wednesday.

After presenting, the clerk has 10 days to validate the petition has been signed by enough registered voters. The clerk's office says 11,906 signatures are needed, Yes 4 Minneapolis says they collected more than 20,000.

The group would have 10 days to "cure" the petition if the clerk determines they need additional signatures. If not, the petition moves to the City Council to be considered.

City council members have put forth their own public safety amendment to the Charter Commission. According to Yes 4 Minneapolis' website, the group is working with the city council and the "proposals are not in conflict."