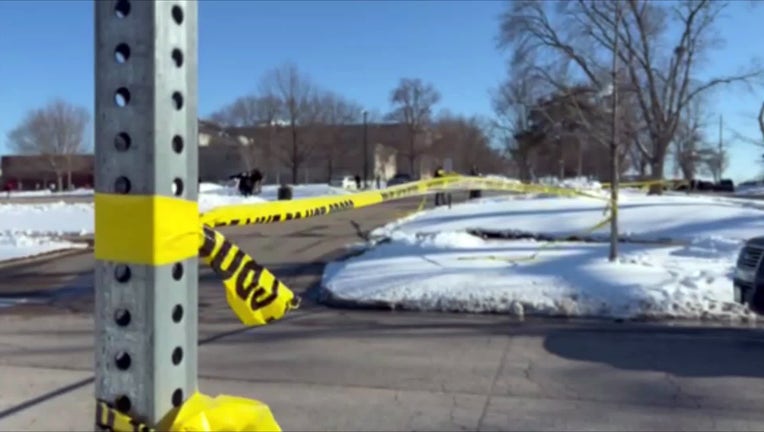 The Des Moines shooting scene (via WOI) (via WOI)

The suspects are each charged with first-degree murder and two counts of attempted murder in the Monday afternoon shooting on the grounds of East High School, near Des Moines’ downtown, about a half-mile (0.8 kilometers) from the Capitol. Police said gunshots fired outside the school came from several shooters from multiple vehicles.

Police named the suspects as Octavio Lopez, 17; Henry Valladares-Amaya, 17; Manuel Buezo, 16; Romero Perdomo, 16; Alex Perdomo, 15; and Nyang Chamdual, 14. All are from Des Moines and the school district didn’t identify any as attending East.

Lopez, who was not a student at the school, was the intended target of the drive-by shooting, police said. The other two shot are females, 16 and 18, who both attend East and were among a group standing with Lopez when they were inadvertently shot, police said. Police had not released the surviving victims’ names by Tuesday afternoon.

"While this incident occurred outside of a school, it could have occurred in any one of our neighborhoods," police said. "The school is where the suspects found their target."

Police said search warrants were conducted at five Des Moines homes and six vehicles in the hours after the shooting. Investigators seized six guns during those searches, police said. 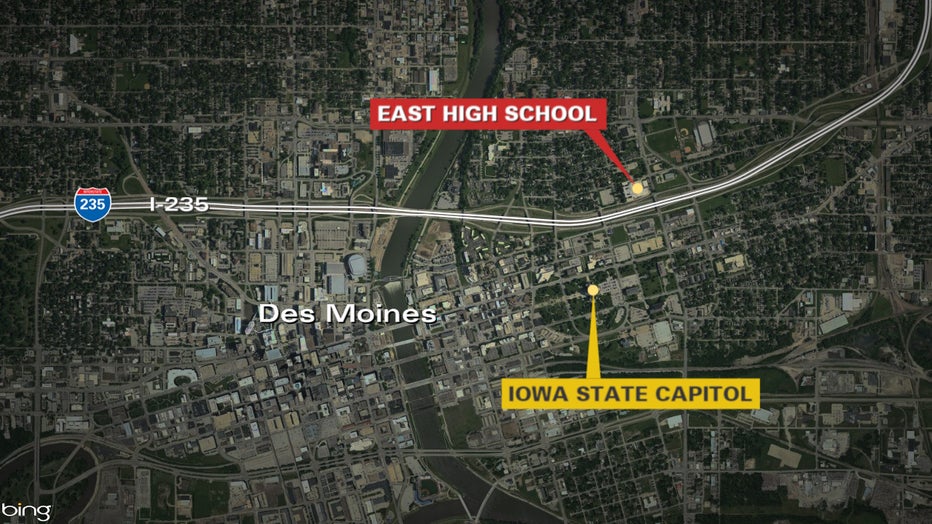 According to court documents, neighborhood camera footage captured the shooting. It showed a group of five teens gathered near a curb when three vehicles passed by and then returned, with people inside firing multiple shots at the group.

Surveillance footage also showed vehicles matching the description from the shooting site departing another site and then returning soon after the shooting. The footage showed individuals that took part in the shooting, according to court documents.

Investigators recovered about 20 spent shell casings at the shooting site and found another 15 in the vehicles that police said were used in the shooting.

On the day of the shooting, calls started pouring in around 2:50 p.m. Monday, shortly before classes were scheduled to dismiss for the day, police spokesman, Sgt. Paul Parizek said.

The district said in a news release that the school was immediately put into lockdown and students were kept inside while police investigated. They were dismissed around 3:30 p.m. after law enforcement gave an all clear.

Principal Jill Versteeg described what happened as "everyone’s worst nightmare" and urged parents to "hug your students and love them."

Officials had already suspended classes districtwide Tuesday so juniors could take the ACT college admissions test. The ACT exams and parent-teacher conferences were canceled Tuesday at East High School and classes will not be held at the school later this week. The district also was making grief counselors available.

President Joe Biden issued a statement Tuesday night offering prayers to the families of the students killed and injured in the shooting. He also praised police and other first responders but noted, "these swift arrests cannot obscure the reality that too many families have had to bury a piece of their soul after yet another tragic shooting."

Biden called for increased efforts to reduce gun violence, including action by Congress.

Superintendent Thomas Ahart said school shootings have "become too common" and said that "real change to gun laws and access would go a long way to help us."

"Our staff and students," he said, "are forced to train for these incidents and the trauma associated with the repeated drills and incidents will remain with them for years to come. It’s unfortunate that our state and our country have become a place where firearms are far too easily accessible."

A motive was not immediately known.

Des Moines Police Chief Dana Wingert went to the school after the shooting and expressed frustration at the violence.

Police said it was the fourth homicide in Des Moines this year.