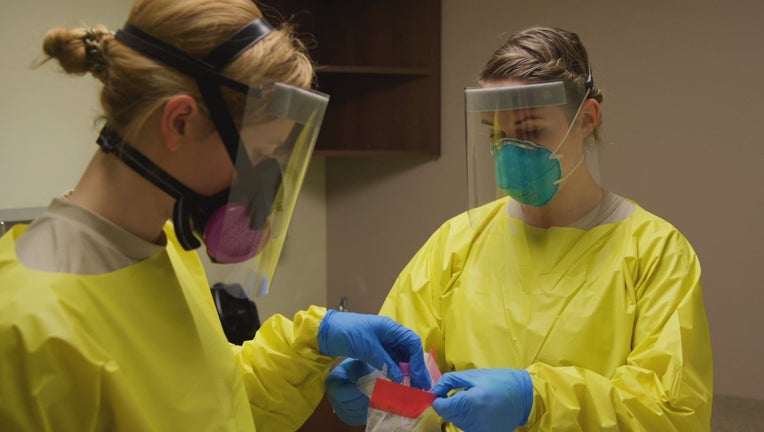 (FOX 9) - As Minnesota ramps up testing, some of the medics conducting those tests are in uniform.

Across the metro and western part of the state, Minnesota National Guard medics are now part of the strategy to ramp up testing in long-term care centers.

As Minnesota ramps up testing, some of the medics conducting those tests are in uniform.

“So, we’re providing the capability to collect data,” said Capt. Jakob Reding of the Minnesota National Guard. “And ultimately it is understanding in a closed facility that we have entry control over and the facility have entry control over to find out how widespread the COVID virus actually is and then as we go back and retest in seven to 14 days, we find out if virus has effectively been mitigated in those facilities.”

The six teams total 66 guard members. They are all certified emergency medical technicians, which is the same training as ambulance crews. Each team also has a nurse or physician’s assistant. The teams are conducting nasal swab tests provided by Mayo Clinic and have the capacity of conducting 2,000 tests a day.

“I think overall our effectiveness from Flash Bang has been incredibly well-received in some cases,” said Reding. “And the speed that we have executed at, going from zero to 66 packs over the course of five days and the ability to test, I believe we are at 12 facilities now in the last five days and increasing that number going forward has ultimately led to a much more effective use of tracking the COVID virus.”

It’s a rapid deployment for a rapidly spreading virus.

There is no end date to this unique mission, which will continue as long as the governor needs them. Guard officials also note that they are not replacing any healthcare workers, they’re just adding to the testing capacity.