CDC Director Dr. Rachelle Walensky pleaded with Americans to continue mask-wearing and refrain from nonessential travel as the coronavirus continues to infect more than 50,000 Americans each day. She cited escalating rates of travel, including around college spring break.

BOSTON - U.S. guidelines that say students should be kept 6 feet apart in schools are receiving new scrutiny from federal health experts, state governments and education officials working to return as many children as possible to the classroom.

Even as more teachers receive vaccinations, the distancing guidelines have remained a major hurdle for schools as they aim to open with limited space. But amid new evidence that it may be safe to seat students closer together, states including Illinois, Indiana and Massachusetts are allowing 3 feet of distance, and others including Oregon are considering it.

Debate around the issue flared last week when a new study suggested that, if masks are worn, students can be seated as close as 3 feet apart with no increased risk to them or teachers. Published in the journal Clinical Infectious Diseases, it looked at schools in Massachusetts, which has backed the 3-feet guideline for months. 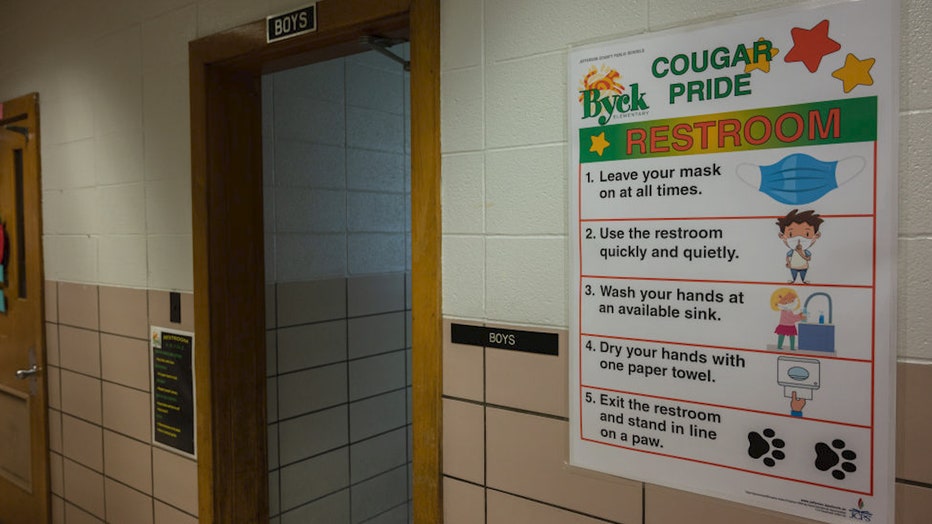 FILE - A poster displaying COVID-19 procedures for students hangs outside of the boys bathroom at Byck Elementary School on March 12, 2021 in Louisville, Kentucky. (Jon Cherry/Getty Images)

RELATED: Moderna begins study of COVID-19 vaccine in children under 12

Asked about it Monday, Dr. Rochelle Walensky, director of the Centers for Disease Control and Prevention, said the agency is now exploring whether children can be seated closer together than was previously recommended. The 6-feet spacing guideline is "among the biggest challenges" schools have faced in reopening, she said.

The CDC included the larger spacing limit in its latest school guidelines, which were issued in February and concluded that schools can safely operate during the pandemic with masks, distancing and other precautions. It suggested 6 feet and said physical distancing "should be maximized to the greatest extent possible."

Other organizations have issued more relaxed guidelines, including the World Health Organization, which urges 1 meter in schools. The American Academy of Pediatrics says to space desks "3 feet apart and ideally 6 feet apart."

RELATED: Swollen lymph nodes can be side effect of COVID-19 vaccine and confused for cancer, doctors say

Dan Domenech, executive director of AASA, a national superintendents group, said he expects to see more states and schools move to the 3-feet rule in coming weeks. With the larger guideline, he said, most schools only have the space to bring half of their students in at a time. Moving to 3 feet could allow about 75% at a time, he said.

"There are districts that have been doing 3 feet for quite some time without experiencing any greater amount of infection," he said.

In Illinois, health officials said last week that students can be seated 3 feet apart as long as their teachers are vaccinated. Before, state officials required 6 feet,

RELATED: CDC study finds 9 out of 10 people in US got 2nd dose of COVID-19 vaccine

With the state’s blessing, the Barrington district near Chicago was reopening its middle schools Tuesday using the smaller spacing rule. Any student will be allowed to attend in-person at the two middle schools, although the district expects roughly 30% to continue with remote learning.

"I’m glad that our public health officials allowed us to move forward by looking at the data and research," said superintendent Brian Harris.

Questions around spacing have led to a battle in Massachusetts, where teachers and some schools are opposing a state plan to bring younger students back five days a week starting next month. The plan calls on schools to seat students 3 feet apart, although many have been using 6 feet as a standard. Districts that fail to meet the reopening deadline would risk losing state funding.

The Massachusetts Teachers Association, a statewide union, argues that seating students closer will increase the risk for everyone in the classroom. It also poses a problem for districts that have agreed to contracts with teachers adopting the 6-feet rule as a requirement.

"They can’t just throw 6 feet out the window. They can’t throw away what has been agreed upon," said Merrie Najimy, president of the union. "If they can’t make it work, then they’re going to have to come to a new agreement."

Public schools in Worcester are among those pushing back against the rule. Tracy O’Connell Novick, a member of the district school committee, said switching to the 3-feet standard would be "betting the health" of the district’s thousands of students and staff.

"It feels like I’m not doing my job if I simply go along with that," she said.

In Boston’s public schools, desks will be spaced at least 3 feet apart but teachers and staff will be asked to keep 6 feet from students and other staff when feasible, said Xavier Andrews, the district’s spokesperson. Schools will also use larger rooms and outdoor spaces to keep students at a safe distance, he said.

In some states that already allow 3-feet spacing, schools say they have seen no evidence of increased risk. In Danville, Indiana, which moved to 3 feet in October, school officials said students have been in the classroom all year with no uptick in virus transmission.

"It’s gone very well for us. I won’t say there has been no transmission, but it’s been staggeringly low — like one time or something like that," said Tim McRoberts, vice president of the school board. "We’ve kept our doors open. We’ve had no temporary shutdowns."

In Ohio, Cincinnati’s school board got an earful from parents and others last month when it proposed resuming in-person learning at the crowded Walnut Hills High School under a model that called for distancing of only 3 feet there while its other schools would use 6 feet.

The critics included Walnut Hills teacher Brandon Keller, who said the plan was foolish and dangerous. He warned the board: "Your decision will have a body count."

Board members backed off on reopening that school, then weeks later narrowly voted for a plan that included a phased reopening, but also warned the physical distancing might not be as much as 6 feet. Students also have options to continue learning virtually.

RELATED: Children likely to be asymptomatic, not tested for COVID-19 but still spreading disease

Seven superintendents in central Oregon sent a letter to Gov. Kate Brown last week asking the state to relax some of its social distancing rules — including the state’s 6-foot barrier — so that more students can return to class full time.

Oregon officials on Monday relaxed a separate rule that barred students from coming into contact with more than 100 people per week. The rule had been cited as another major hurdle to reopening schools.

Oregon’s Crook County School District, which has had students in classrooms most of the school year, has found that what’s most effective in combating the virus are masks, contact tracing and sending home students when they’re showing symptoms, said district spokesperson Jason Carr.

"The 6-feet rule doesn’t make as much sense as the other safety measures," he said. "What may have made sense two months ago or at the beginning of the year might not now," he said.