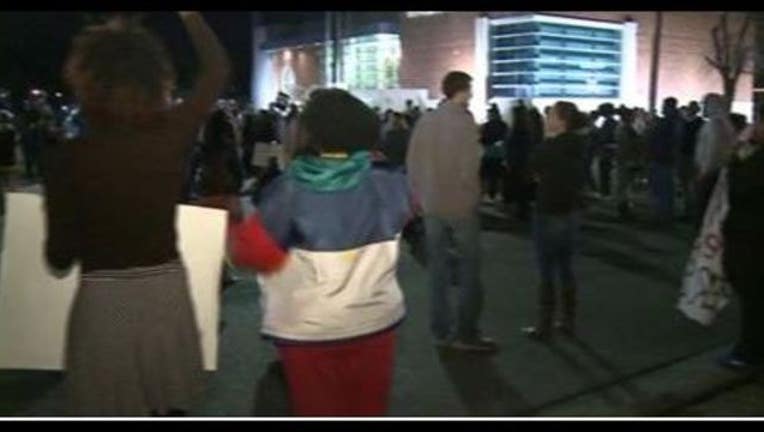 FERGUSON, Mo. (AP) -- Two officers were shot in front of the Ferguson Police Department early Thursday, authorities said, as demonstrators gathered after the city's police chief resigned in the wake of a scathing Justice Department report alleging bias in the police department and court.

A 32-year-old officer from nearby Webster Groves was shot in the face and a 41-year-old officer from St. Louis County was shot in the shoulder, St. Louis County Police Chief Jon Belmar said at a news conference. Both were taken to a hospital, where Belmar said they were conscious. He said he did not have further details about their conditions but described their injuries as "serious."

"I don't know who did the shooting, to be honest with you," Belmar said, adding that he could not provide a description of the suspect or gun.

He said he assumed, based on where the officers were standing and the trajectory of the bullets, that "these shots were directed exactly at my officers."

The shots were fired shortly after midnight as protesters gathered following the resignation of embattled Ferguson Police Chief Thomas Jackson on Wednesday. Before the shooting, some at the protest chanted to show their dissatisfaction with the resignations of Jackson and City Manager John Shaw this week, the St. Louis Post-Dispatch reported. Authorities from multiple law enforcement agencies also gathered outside the department.

The protest was a familiar scene in Ferguson, which saw similar and much larger demonstrations after the shooting death of black 18-year-old Michael Brown last summer by city police officer Darren Wilson. A state grand jury cleared Wilson, who is white, in November, sparking further protests, looting and fires. But Wednesday was the first time an officer at a protest had been shot.

Marciay Pitchford, 20, was among the protesters outside the police department. She told The Associated Press that the protest had been mostly peaceful until she heard the shots.

"I saw the officer go down and the other police officers drew their guns while other officers dragged the injured officer away," Pitchford said. "All of a sudden everybody started running or dropping to the ground."

Belmar said the shots were fired from across the street from the police department.

After the shooting, officers with guns and in riot gear circled the station, and more than a dozen squad cars blocked the street.

Mayor James Knowles III announced Wednesday that the city had reached a mutual separation agreement with Jackson that will pay him one year of his nearly $96,000 annual salary and health coverage. Jackson's resignation becomes effective March 19, at which point Lt. Col. Al Eickhoff will become acting chief while the city searches for a replacement.

Jackson had resisted calls by protesters and some of Missouri's top elected leaders to step down over his handling of Brown's shooting and the weeks of protests that followed. He was widely criticized from the outset for the aggressive police response to protests and his agency's erratic and infrequent releases of key information.

He took nearly a week to publicly identify Wilson as the shooter and then further heightened tension in the community by releasing Wilson's name at the same time as store security video that police said showed Brown stealing a box of cigars and shoving a clerk a short time before his death.

During a 12-minute news conference, Knowles said Jackson resigned after "a lot of soul-searching" about how the community could heal from the racial unrest stemming from the fatal shooting last summer.

"The chief is the kind of honorable man you don't have to go to," Knowles said. "He comes to you when he knows that this is something we have to seriously discuss."

The acting head of the Justice Department's civil rights division released a statement saying the U.S. government remains committed to reaching a "court-enforceable agreement" to address Ferguson's "unconstitutional practices," regardless of who's in charge of the city.

Jackson oversaw the Ferguson force for nearly five years before the shooting that stirred months of unrest across the St. Louis region and drew global attention to the predominantly black city of 21,000.

In addition to Jackson, Ferguson's court clerk was fired last week and two police officers resigned. The judge who oversaw the court system also resigned, and the City Council on Tuesday agreed to a separation agreement with Shaw, the city manager.