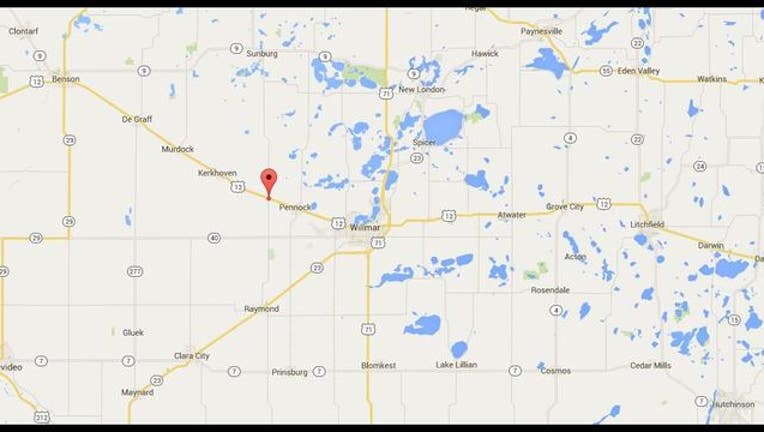 PENNOCK, Minn. (KMSP) - A two-vehicle crash in Kandiyohi County killed one driver and sent 8 others to the hospital on Saturday night.

According to the Kandiyohi sheriff’s office, officials received a report of a crash at 10:59 p.m. at Highway 12 and County Road 7, about 3 miles west of Pennock, Minn. in Mamre Township. A Ford Fusion was traveling south on County Road 7 when it was broadsided by a Ford Freestyle that was traveling west on Highway 12.

The 55-year-old driver from Venice, Calif. of the Fusion was pronounced dead at the scene. His name has not been released and he was wearing his seatbelt and his airbag deployed. A passenger in the Fusion, 46-year-old Maria Vlachouhahn, also from Venice, was brought to St. Cloud Hospital with non-life-threatening injuries. A second passenger, Eva Vlachouhahn, was taken to Rice Hospital in Willmar with non-life-threatening injuries. They both were wearing seatbelts.

The driver of the Freestyle, 31-year-old Diego Velazquez Sanchez of Kerkhoven, Minn., and 5 other passengers, two of them children, were taken to St. Cloud Hospital with non-life-threatening injuries. No alcohol was detected on the driver. Jose Cabrera Ortega, 33, Sergio A. Delgado, 26 , Martha C. Lopez, 26, and two children were listed as passengers in the Freestyle by Minnesota State Patrol officials. All were wearing seatbelts.

Another fatal on Minnesota roads

There was another fatal crash on Minnesota roads on Saturday afternoon. A Chevrolet HHR, a Cadillac VLU, a Hyundai EGM and a Hyundai Elantra were all traveling east on Interstate 94 at County Road 19 in Albertville where a rear-end collision occurred at slowing traffic at about 1:30 p.m.

A passenger in the Elantra, 38-year-old Erin Bateman, was killed. She was not wearing a seatbelt. There were four people total in that vehicle; driver Douglas Bateman, 63, and passenger Frieda Bateman, 62, both of Winnipeg, suffered non-life-threatening injuries and Elizabeth Sabourin, 10, was seriously injured. The driver and other two passengers were wearing seatbelts. The driver of the EGM, 59-year-old Ronald Johnson of Red Wing, Minn., was the only other person injured in the crash. His injuries were non-life-threatening.