(FOX 9) - Drought conditions continue to expand across the Twin Cities metro and much of central Minnesota and western Wisconsin because we just can't seem to get any persistent rain in many of these areas. If you've paid even the slightest attention to the radar over the last few weeks, it seems like every time a storm rolls toward the Twin Cities, it seemingly falls apart as it moves in or splits and goes around us, leaving us entirely dry or with just a taste of light rain.

Well, it's not your imagination, this has happened time and time again so far this season. But before you call your local officials to insist on a criminal investigation, I can assure you that there is nothing nefarious going on. I don't want to downplay the abnormal nature of our current predicament, but there are some explanations for why it's happening. 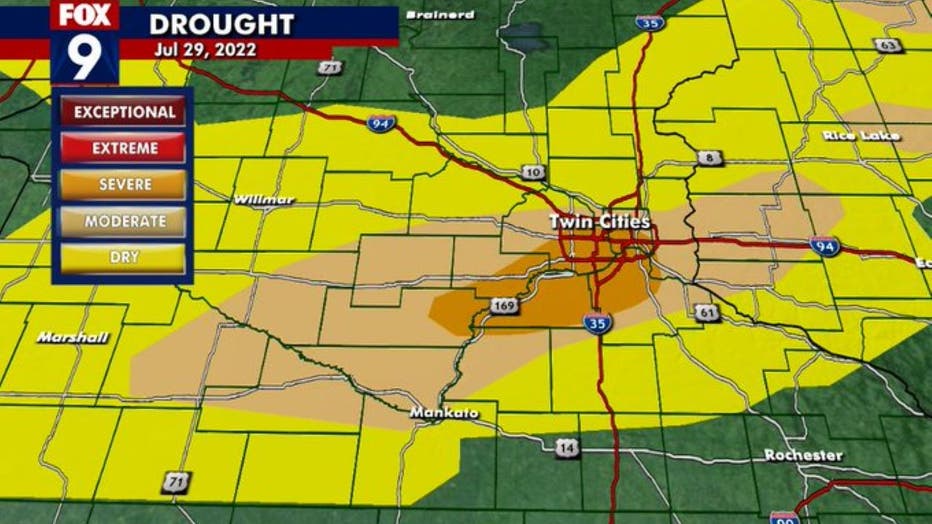 Once the summer pattern sets up in June, it can often linger for several months, leading to copious amounts of rain in some spots, while others see hardly anything at all. In years past, we have benefited from this — 2014-2016 were some of the wettest summers on record in the Twin Cities, and we certainly benefited from this type of "stuck" pattern. This year though, we have been in the drier zone of our persistent pattern.

The reason for this is that the two main components to produce rain are split; one going to the north and the other staying to the south.

There are three things needed to produce precipitation on Earth. Lift, moisture, and heat. Heat though is entirely relative. You need warm air under cold air. It doesn't matter if it's 80-degree air under 70-degree air, or 10-degree air under 0-degree, as long as the temperatures at ground level is warmer than the air above, boom, you have lift. This gives the atmosphere a "natural" lift because warm air is less dense than cold air and will naturally rise. But in the summer you often have a temperature inversion at a certain level in the atmosphere, a "lid" if you will, that prevents storms from forming. So this natural lift usually isn't enough. So you'll need some additional lift.

That additional lift can come in the form of low pressures or spin in the atmosphere that allows the exchange of air in many different directions to force air upwards. The average "Joe" would just call these storm systems. But the last, and maybe the most important thing, you need is moisture. There is naturally more moisture in the atmosphere in the summer anyway, thanks to warmer air supporting a higher percentage of it, and all of our bodies of water and blooming vegetation excreting moisture at the atomic level ... known as evaporation. But we still need additional moisture to be able to receive substantial rainfall. That source is usually the Gulf of Mexico. Well, when a boundary of some kind (a stationary front or cold front) sits to our south, it essentially separates us from our moisture source. This boundary squeezes that moisture out in areas to our south, generally leaving us dry. It's this pattern that has led to very dry sections of central Minnesota and western Wisconsin, while much of far southern and northern Minnesota has been fairly average in rainfall since June 1. 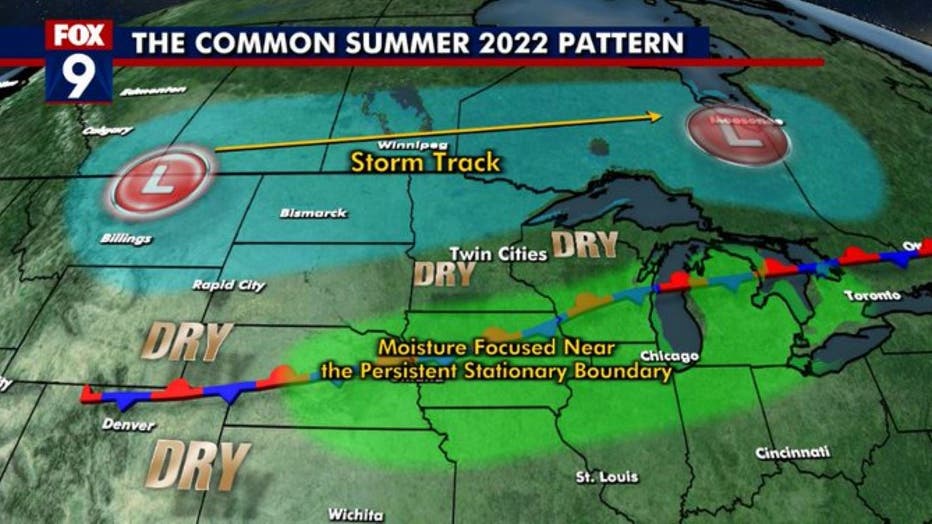 This topic is talked about a lot here in Minnesota. Folks have been contacting me for years asking why storms always seem to miss their location, "They always seem to split around me" they tell me. Well, I'm not going to tell you that it doesn't happen from time to time, but using the word "always" is a bit dramatic. If storms always missed your location then you would never get another drop of rain, right? Now, I know that's not what they mean, but it will rain in every location in Minnesota eventually.

A few things about our atmosphere that might put your mind at ease:

Friday's forecast: Sunny with highs in the low 80s

Warmer over the weekend with highs Sunday near 90.