It's been an especially cloudy and gloomy month for Minnesotans as they yearn for the sun.

(FOX 9) - This month has been the area's gloomiest January in more than 50 years, and it will go down as the cloudiest first month of the year since solar radiation records began at the University of Minnesota St. Paul Climate Observatory back in 1963.

For many, the gray skies can make for dull days. In fact, several Minnesotans are taking this opportunity to visit places like the Como Park Conservatory for some much-needed reprieve.

Christine Grisham and Hal Freshley visit the gardens often to lift their spirits.

“I'm really sensitive to it, and I use a light therapy and I go to sauna and try to get as much sun as I can," Grisham said.

However, FOX 9 Chief Meteorologist Ian Leonard said the cloudy days do have a silver lining: they bring warmer temperatures during what is typically the coldest part of the season.

“We've had it pretty easy. The trade-off is you don't get the cold, but you get the gloom and the gray…not sure which one I want," he said.

But it’s not all doom and gloom at the JV cross-country meet at Mount Como.

“Gloomy is not as fun to ski because you can’t see the trail as well,” said skier Addie Fabel.

Breaking down the data

FOX 9 Meteorologist Cody Matz took a look at the data:

Congratulations, you’ve now lived through the gloomiest January in more than 50 years in the Twin Cities! While not a real bright month on average, the coldest month of the year isn’t typically our cloudiest; that honor goes to November. But January of 2020 will go down as the cloudiest first month of the year since solar radiation records began at the University of Minnesota St Paul Climate Observatory back in 1963.

We have now been cloudy for nearly 7 consecutive days. The last time there was a stretch like this wasn’t too long ago, back in October. But they’re not all that common… happening maybe once every couple of years. The longest such streak was 15 days in a row from October 30 to November 13, 1972. At the moment, getting another 7+ days of cloudy skies is a long shot, but we could easily see this stretch of clouds extend into the weekend giving us at least 10 consecutive days of cloudy skies. 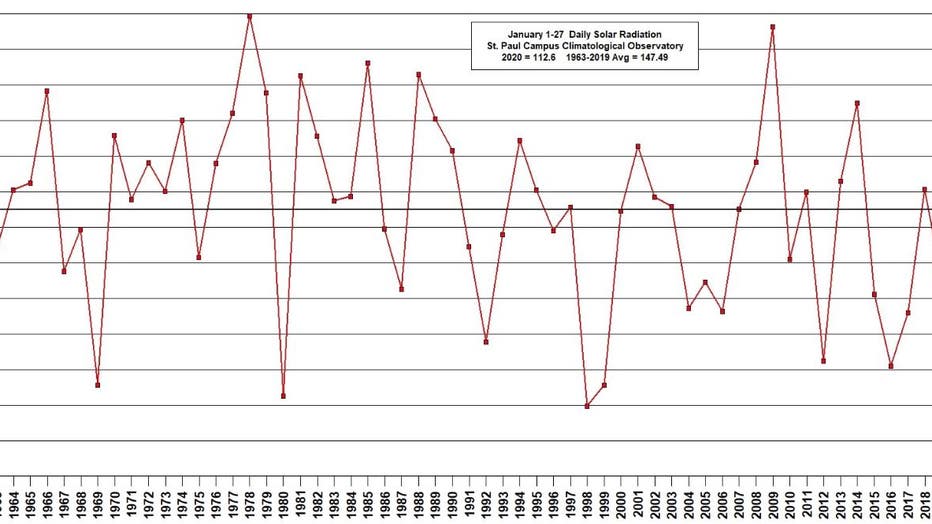