Radar imaging satellites from Finnish company ICEYE captured an image of Grand Bahama Island's coastline at 11:44 a.m. local time on Monday which shows vast flooding over much of the island's land mass.

FREEPORT, Bahamas - A stark satellite image comparison reveals just how extensive the flooding from Hurricane Dorian is in the Bahamas.

Radar imaging satellites from Finnish company ICEYE captured the image at 11:44 a.m. local time on Monday. The yellow line indicates the coastline of the island of Grand Bahama in the northwest region of the island chain. 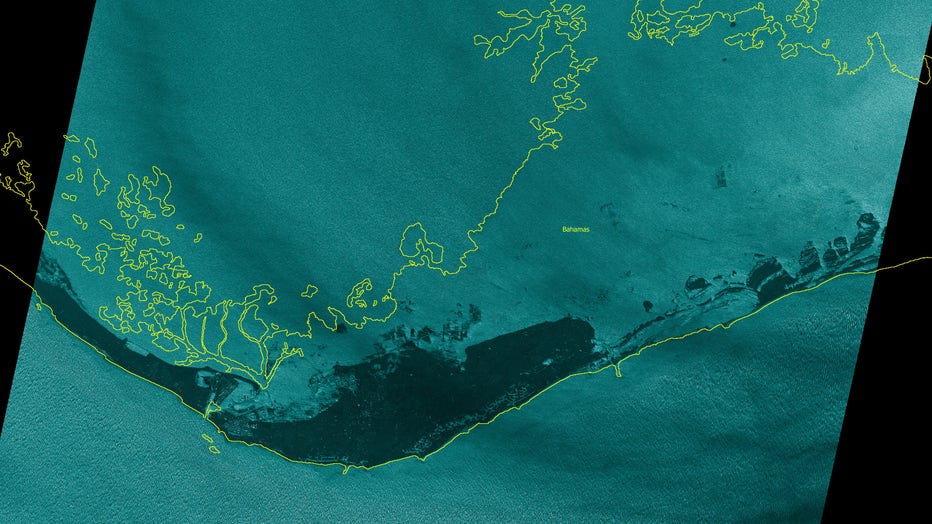 A SAR satellite image taken by ICEYE of Grand Bahama Island on the morning of Sept. 2 reveals extensive flooding in the wake of Hurricane Dorian. (ICEYE)

ICEYE uses a form of radar called Synthetic-aperture radar (SAR) that can be used to either create two-dimensional images or three-dimensional reconstructions of objects, such as landscapes, using small, efficient satellites.Because these satellites use radar, they do not need clear skies or even light to create accurate images — radar imaging allows satellites to map the surface of the Earth through even the thickest cloud coverage or in complete darkness, making them ideal to gather information during a hurricane.

When ICEYE satellites captured imagery of flooded Grand Bahama Island on Monday morning, the storm had already been lingering there overnight. 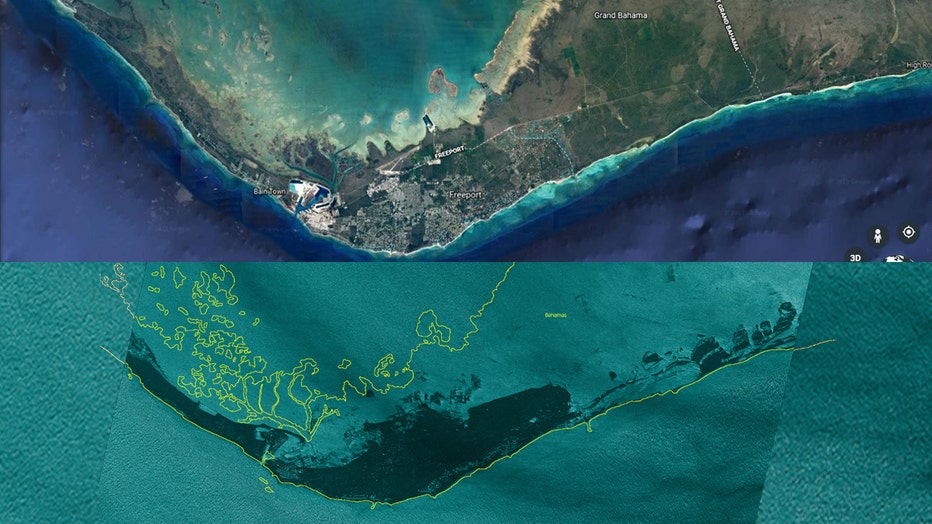 The eyewall of Hurricane Dorian first hit Grand Bahama island Sunday night, and according to meteorologists, part of the eye lingered there 18 hours later.

RELATED: Dorian isn't moving because the upper atmosphere is too calm

"This is unprecedented," said Jeff Masters, meteorology director at Weather Underground who used to fly into hurricanes. "We've never had a Category 5 stall for so long in the Atlantic hurricane record.“

The flooding in the Bahamas has gotten so bad in large part due to the fact that Hurricane Dorian is stalling over the island country — at one point Hurricane Dorian was crawling at just 1 mph over Grand Bahama.

The islands were pummeled with so much wind and water that authorities urged residents to find flotation devices and grab hammers to break out of their attics if necessary.

According to a Monday morning advisory from the U.S. National Hurricane Center in Miami, the storm was virtually parked over Grand Bahama island, which was in for a "prolonged period of catastrophic winds and storm surge" though the night.

"We are in the midst of a historic tragedy," Bahamian Prime Minister Huber Minnis said, calling the devastation "unprecedented and extensive.

"In some parts of Abaco, "you cannot tell the difference as to the beginning of the street versus where the ocean begins," Minnis said. According to the Nassau Guardian, Minnis called it "probably the most sad and worst day of my life to address the Bahamian people."

This story was reported from Los Angeles. The Associated Press contributed to this report.