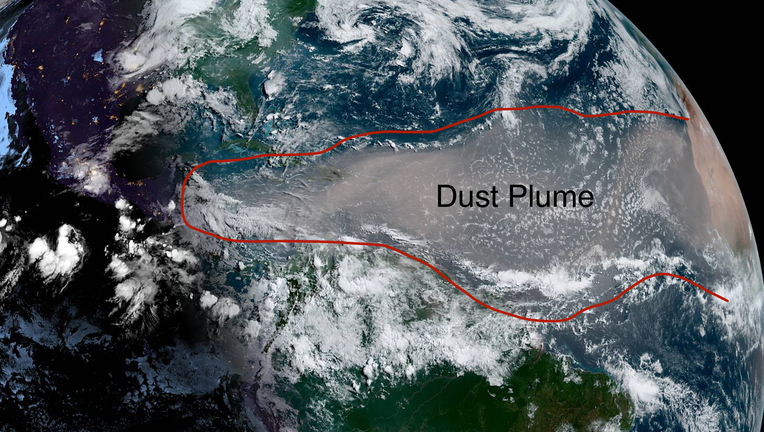 Particles of dust from the Sahara Desert may land in Minnesota in the days ahead. Yes, I am referring to the desert in Africa.

In one of the larger events we’ve seen in years, a plume of dust blown out into the Atlantic from the western Sahara Desert is making its way across the Atlantic and heading for North America. While this is NOT an unusual occurrence, the overall scope and severity of this event just might be.

Saharan dust may be coming to Minnesota

Particles of dust from the Sahara Desert may land in Minnesota in the days ahead. Yes, I am referring to the desert in&nbsp;Africa.

But before you think this is another plague of 2020, for the most part, this is perfectly normal. In the late spring and early summer, the winds are often howling across northern Africa. These winds spew dust and sand particles into the atmosphere and throw them into the Atlantic. This is so common in fact that meteorologists have a name for it. It’s called the Saharan Air Layer.

Dust has a specific size and shape just like anything else. Because of this, the dust gets launched into a specific layer of the atmosphere as it travels into the Atlantic. Well, this year, there’s so much of it that it’s actually blocking out the sun as it crosses the Caribbean and heads for North America.  Visibility from the Virgin Islands, to Puerto Rico and Jamaica has dropped to just a couple of miles as the blob of dust goes by, making it look like the end of the world in what is typically one of the prettiest spots on the globe.

This dust blob is heading for the U.S. and will likely begin pushing to the Southeast U.S. on Wednesday. While the overall human effects will be limited, those with breathing related illnesses are being asked to stay indoors. But some of this dust may actually make it to Minnesota late in the weekend or early next week. Look at the progress as it rolls through the southeast and heads up the Mississippi River.

Notice though that just like anything else that migrates through a fluid, the dust is far from evenly dispersed. There will be widespread very light or almost negligible dust not too far from areas with thick heavy dust with the Gulf Coast area likely to be most impacted.  But if you look closer in the current forecast, there’s even some dust that could head into Minnesota early next week.

What does that mean for us? Well, honestly not much. There may be more of a hazy sky and sunrises and sunsets may be a LOT prettier, but that’s about it. But will be cool to look up and say that what your seeing was actually in northern Africa just a couple weeks ago.

This could also be the first of at least two pushes of Saharan Dust into the U.S. as there are a couple more large plumes heading across the Atlantic.  The one good news about all the dust? It often chokes off any possible developing tropical systems, so as long as the dust is widespread through the Atlantic, the likelihood of seeing any major tropical system is very low.