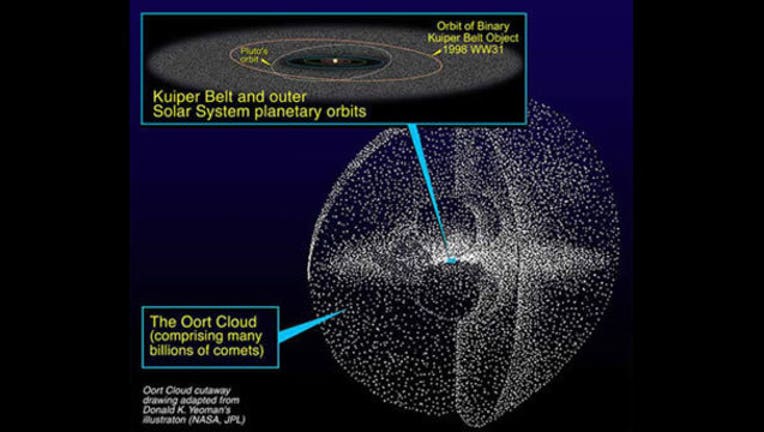 Just when we thought we have conquered the world by getting up close to one of the last bodies of rock in our Solar System, according to Space.com astronomers think they have found a new dwarf planet far beyond Pluto's orbit. This suggests that a distant realm could contain millions of undiscovered objects, including, perhaps, a world larger than Earth.

The newfound celestial body, called 2012 VP113, joins the dwarf planet Sedna as a confirmed resident of a far-flung and largely unexplored region scientists call the "inner Oort Cloud." This cloud is still hypothetical, but scientists believe it is a spherical distribution of icy bodies presumed to exist in the far reaches of the Solar System.  This cloud has long been thought to be comprised of mostly comets or small objects, but this recent discovery, along with Sedna, could be the beginning of a new understanding of what’s out there beyond Pluto.

Furthermore, 2012 VP113 and Sedna may have been pulled into their long, looping orbits by a big planet lurking unseen in these frigid depths.  Now, scientists don’t know if this large planet actually originated and still exists in our system, or if another large celestial body from another star system came close enough to steer them into their current orbit millions or even billions of years ago.

"These two objects are just the tip of the iceberg," study co-author Chadwick Trujillo, of the Gemini Observatory in Hawaii, told Space.com. "They exist in a part of the solar system that we used to think was pretty devoid of matter. It just goes to show how little we actually know about the solar system."

If scientists can determine that these two worlds really do live close enough to be classified as part of our Solar System, then everything we thought about our world is about to change!